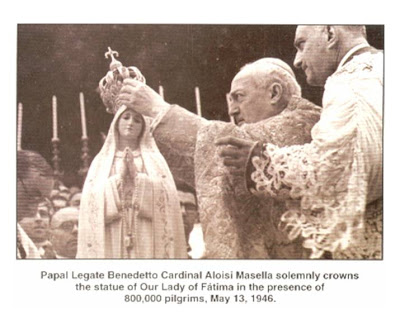 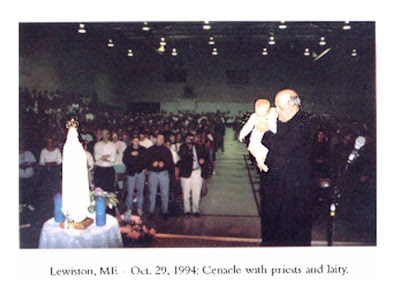 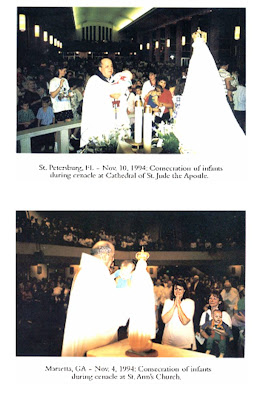 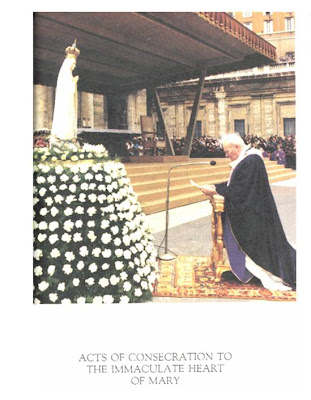 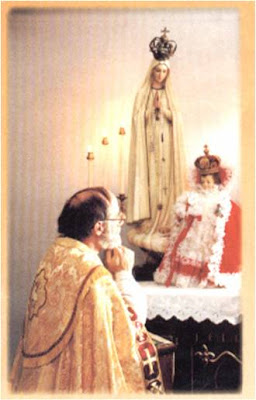 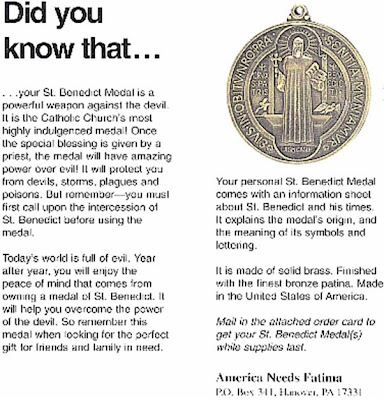 In case it is hard to read, this medal is sold with the following instructions:

Did you know that…your St. Benedict Medal is a powerful weapon against the devil. It is the Catholic Church’s most highly indulgenced medal! Once the special blessing is given by a priest, the medal will have amazing power over evil! It will protect you from devils, storms, plagues and poisons. But remember-you must first call upon the intercession of St. Benedict before using the medal. Today’s world is full of evil.
Year after year, you will enjoy the peace of mind that comes from owning a medal of St. Benedict. It will help you overcome the power of the devil. So remember this medal when looking for the perfect gift for friends and family in need. Your personal St. Benedict Medal comes with an information sheet about St. Benedict and his times. It explains the medal’s origin, and the meaning of its symbols and lettering…

This reads exactly like a manual on witchcraft or any pagan usage of talismans for the purpose of magic or occult practices. The medal will not work unless the witchdoctor blesses it. Also, do not call on Jesus in a time of need, but on a saint and his magic medal. Plus, you should encourage your friends and family to do likewise. Notice that the group selling this talisman is called America Needs Fatima, apparently we do not need Jesus. 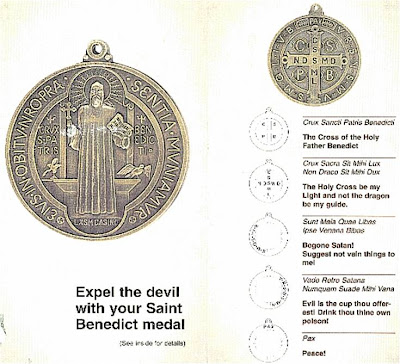 Expel the devil with your Saint Benedict medal.” The symbols, acrostics and Latin are then explained as stating, “The Cross of the Holy Father Benedict…The Holy Cross be my Light and not the dragon be my guide…Begone Satan! Suggest not vain things to me!…Evil is the cup thou offerest! Drink thou thine own poison!…Peace.” 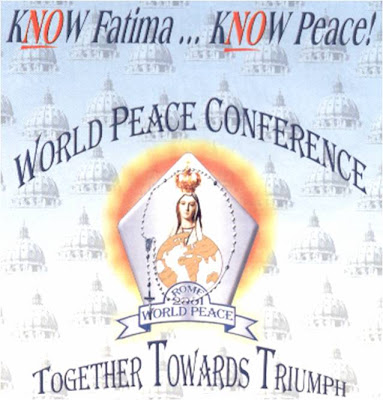 The above is a corruption of a bumper sticker that reads “No Jesus, No Peace-Know Jesus, Know Peace” The reason that Jesus has been ignored is that, in direct violation of biblical doctrine, groups that exalt Mary believe that it is she who will bring world peace.

The Biblical Point of View:
In this section I seek to demonstrate that, Biblically speaking, simply making an image is not a problem. However, the image must be an accurate depiction and must not be worshipped or served.

Firstly, consider that God Himself made images:

Then God said, ‘Let us make man in our image, in our likeness, and let them rule over the fish of the sea and the birds of the air, over the livestock, over all the earth, and over all the creatures that move along the ground.’ So God created man in his own image, in the image of God he created him; male and female he created them….Whoever sheds the blood of man, by man shall his blood be shed; for in the image of God has God made man (Genesis 1:26-27, 9:6).

Incidentally, I have written an essay on The Creation of Adam.

You shall not make for yourself an idol in the form of anything in heaven above or on the earth beneath or in the waters below. You shall not bow down to them or worship them….You are not to make with me gods of silver, nor are you to make gods of gold for yourselves” (Exodus 20:4-5, 23 and Deuteronomy 5:8-9). 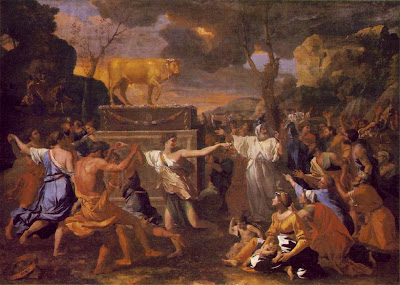 Clearly, the full thought behind the statement is not simply do not ever make any images but rather, do not make gods, do not worship images.
Many times God commanded His people to make images. God commands Moses to make images of cherubim who are angelic beings in heaven above. God also commanded the making of images of pomegranates, almonds, flowers and a serpent, which are things on the earth.

Regarding the Ark of the Covenant God commands: 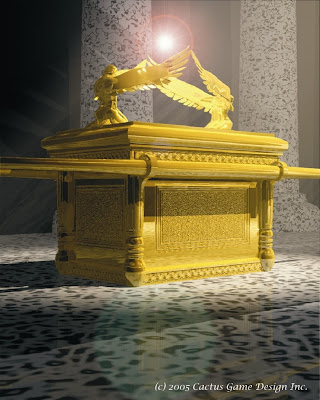 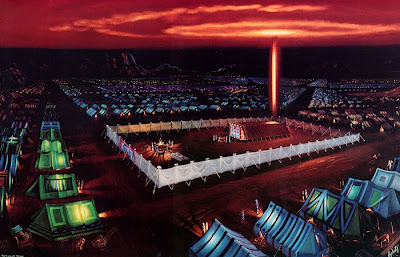 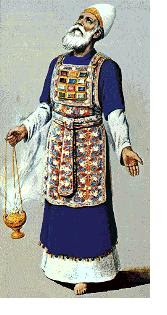 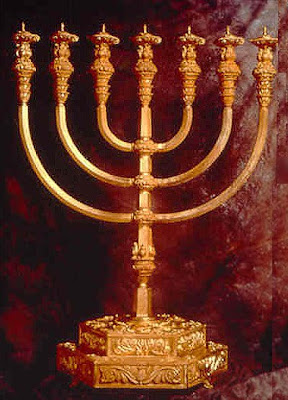 When God gave David specific instructions for the Temple that Solomon would build He again commanded that images be made. In this case of cherubim, from heaven above and oxen, lions, lilies, palm trees and pomegranates, things on the earth: 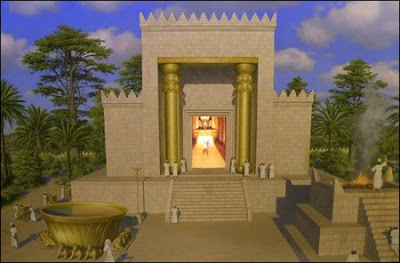 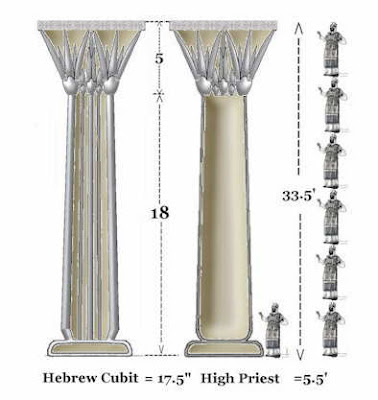 Regarding the sea cast of metal we learn,

The Sea stood on twelve bulls, three facing north, three facing west, three facing south and three facing east. The Sea rested on top of them, and their hindquarters were toward the center. It was a handbreadth in thickness, and its rim was like the rim of a cup, like a lily blossom. It held two thousand baths (see 1st Kings 7:25-26; 2nd Chronicles 4:5). 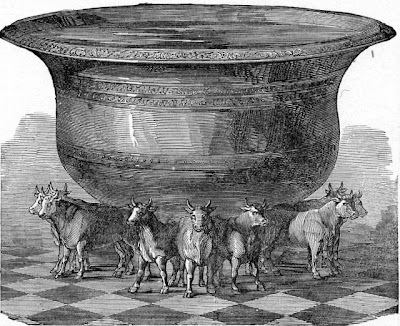 On the panels between the uprights were lions, bulls and cherubim-and on the uprights as well. Above and below the lions and bulls were wreaths of hammered work….He engraved cherubim, lions and palm trees on the surfaces of the supports and on the panels, in every available space, with wreaths all around (1st Kings 7:29, 36).

In the inner sanctuary he made a pair of cherubim of olive wood…He placed the cherubim inside the innermost room of the temple, with their wings spread out…On the walls all around the temple, in both the inner and outer rooms, he carved cherubim, palm trees and open flowers….He made the curtain of blue, purple and crimson yarn and fine linen, with cherubim worked into it….The priests then brought the ark of the LORD’s covenant to its place in the inner sanctuary of the temple, the Most Holy Place, and put it beneath the wings of the cherubim. The cherubim spread their wings over the place of the ark and covered the ark and its carrying poles” (1st Kings 6:23-29; 2nd Chronicles 3:14, 5:7-8). 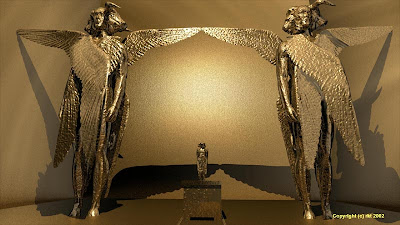 Negative Commandments, Do not Worship Images:
The negative commandments we find regarding images are the ones against bowing down, serving or worshipping them. Possibly the clearest explanation of this point in the scripture is found in a commandment God gave to Moses and its eventual corruption.

Years later we find out what the Israelites ended up doing with the serpent Moses made,

in the third year of Hoshea son of Elah king of Israel, Hezekiah the son of Ahaz king of Judah began to reign…He removed the high places, and brake the images, and cut down the groves, and brake in pieces the brasen serpent that Moses had made: for unto those days the children of Israel did burn incense to it: and he called it Nehushtan (2nd Kings 18:1, 4). 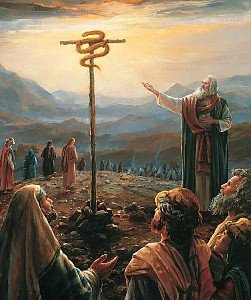 Burned incense means that they were worshipping it as an idol. They were worshipping the image and so Hezekiah names it, Nehushtan which means “a thing of brass” to show how ridiculous they were to worship a man made sculpture. The image was not the problem, it is the worship of it that is the breaking of God’s commandment.