…cannibalism doesn’t always have to be grotesque.
There are fascinating and even beautiful aspects to this phenomenon…
—Bill Schutt

It is relatively easy to dismiss CNN Network anchor Reza Aslan eating human brains along with cannibals in India as a crazy antic. However, is it a sign of things to come?

…cannibalism doesn’t always have to be grotesque.
There are fascinating and even beautiful aspects to this phenomenon…
—Bill Schutt

It is relatively easy to dismiss CNN Network anchor Reza Aslan eating human brains along with cannibals in India as a crazy antic. However, is it a sign of things to come?

I will begin by noting that Bill Schutt, zoologist at the American Museum of Natural History (aka a temple to Atheistic-evolution), is attempting to sell books and so making provocative statements gets attention. On the other hand, neo-poop-culture continues normalizing actions that mere years ago were not only taboo but would never have been thought to be become the new normal—and is doing so at ever increasing rapidity: see VIDEO: Will bestiality and pedophilia be the next civil right?

We are told that “cannibalism is an oft-misunderstood topic” and Schutt sought to move away from books on the topic which are “sensationalist, or aimed at academics” and wanted to write one that was “entertaining and informative but also shows that…” and completes his thought with the quote above.

It is of the utmost importance to note that such a view proceeds forth from two sources: Paganism and Atheistic-evolution. Traditional tribal cannibalism is a result of Pagan animism whereby the consuming of the flesh of dead relatives is meant to have them live on or consuming enemy warriors is meant to transfer their spirit power to the eater. In the case of Atheistic-evolution, some animals are cannibals, the theory is that we humans are just animals and so we too can be cannibals since there is no absolute ethical which would restrict us from doing so.
As Bill Schutt puts it, “Cannibalism is natural behaviour across the entire animal kingdom…From an evolutionary perspective this makes sense.” 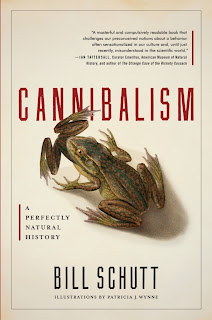 One could draw a distinction between humans eating other humans as a psychotic criminal act—but why consider it psychotic if it is simply a “natural behaviour across the entire animal kingdom” of which we are supposedly a part?—due to the Paganism noted above and due to desperation for nutrition such as in severe cases of emergency—the ol’ stranded on an island scenario.

Schutt does state that even though “We hear mostly about criminal cannibalism” he “didn’t want to focus on this aspect or glorify it in any way. Instead, I looked at the instances where cannibalism makes more sense.”
He notes cannibalistic “funerary practices in communities around the world.”

As an aspect of cannibalism he refers to “people who still eat their own placentas. This has recently become more popular in the United States.” And “I even tried it for myself! I was invited to Texas to sample the fresh placenta of a woman who’d just had her 10th child. Her husband cooked it up and it was delicious. I’m not going to reveal what it tasted like, but I will say that it went well with red wine!”

As our general repulsion to cannibalism Bill Schutt again, and exclusively, turns to evolution, “You wouldn’t want to eat your family because you’d be taking your own genes out of the population too, reducing your future chance of evolutionary success” which is a throw away point since you could eat them after they die of natural causes or, as society is going today, due to euthanasia—followed by a catered buffet!!! 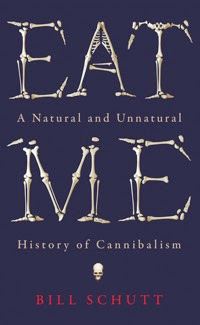 He was asked “Could cannibalism ever make a comeback?” and replied “I think it could” because “In nature” and you see where he is going again or rather, whence he is coming: evolution.
He refers to the problem of overpopulation and “a lack of alternative nutrition.” He states, “I’d be mortified” but does not say why (since, like, it’s natural and stuff).”
This is fascinating because when I debated an Atheist on the issue of morality I noted that many well-known and respected Atheists argue that rape played a beneficial role in evolution—see here. This was just after the devastating earthquake that hit Haiti and so, seeking to push their “logic” to its (il)logical conclusion, I specified that perhaps rape will make a moral comeback in Haiti since they needed to increase their numbers quickly.

Lastly, he is quick to emphasize that our general rejection of and repulsion at cannibalism is due to it having become a “Western taboo.” So, just like anything else, simply doing away with even more Western (read Judeo-Christian) principles and the next thing you know there will be drive-thru cannibalism junk-food joints—do you want a side of placenta with that?

If you are so inclined, here are links to Bill Schutt’s book Cannibalism: A Perfectly Natural History (which appears to be an aka for Eat Me: A Natural and Unnatural History of Cannibalism).

Also, see my video on the cannibalism movie “Neon Demon”.