Nephilim pop-researchers claim that this is about a Nephil because they think Nephilim were giants (whatever that means) and the tallest of these skeletons is, behold!, 6.3 ft.–quite anticlimactic.https://t.co/c02NbVfLcx

Since I just ran across an article by Adam Eliyahu Berkowitz titled, Discovery of Biblical ‘Nephilim’ Remains Opens Questions Over Giants’ Roles in End of Days (April 07, 2021 AD) posted on “Israel365 News” which is self-described as that it “offers a fresh and Biblical perspective on the latest news from Israel and the Middle East. Our bias is not liberal nor conservative – just Biblical.”

The title is very exciting and click-baity but is it accurate?

Well, my tweet is a spoiler but the Berkowitz wrote of “remarkably tall skeletons…considered tall even by today’s standards…the skeletons were from an particularly tall race of people…taller skeletons…greater height” and/but notes, “The evidence…leads the experts to believe that the males in the village averaged a height of six feet, three inches” referring to the Eastern China Jiaojia village.

The terms “tall,” “greater height,” and “average” are vague, generic, and subjective but we are specifically told they were 6.3 ft. which may have been tall or very tall on average in that location, etc. but not outlandishly tall at all in general.

Berkowitz’s emphasis is that their height, their “description strongly reminiscent of the Biblical Nephilim who are believed to also play a significant role in the Final Battle on Mount Zion at the End of Days…Skeleton remains discovered in China point to resemblances with the Biblical Nephilim…The skeletons found in China are consistent with the giants found in the Biblical narrative who were remarkably tall but still able to breed with human women.”

He further comments, “According to the text, Nephilim survived the flood and later reappeared in the Land of Israel.”
Yet, the text stated no such thing. This is a common misconception based on reading “after that” to refer to the flood. Yet, it clearly does not and it tells us exactly to what, to when, is it referring, “in those days, and also after that, when the sons of God came in unto the daughters of men, and they bore children to them.”
Thus, when the sons of God first did so and thereafter—so they continued doing so. Yet, that is all pre-flood and the flood is not even mentioned for the very first time until verse 17—a full 13 verses later.

He then writes, “When the spies were sent to scout out the land, they were met by Nephilim who were so large that they deeply intimidated the Children of Israel.” But he is actually believing an “evil report” stated by unfaithful, disloyal, contradictory, embellishing spies who made four claims about which the rest of the Bible knows nothing, who also contradicted Moses, Caleb, Joshua, God, and the rest of the entire Bible and whom God rebuked—they just concocted a fear-mongering scare-tactc tall tale.

Berkowitz tells us that Rabbi Yosef Berger noted, “The Nephilim were angels that God was forced to send to Earth as a punishment” which is folklore if anything and that Berger noted that “the 18th century known as the Vilna Gaon…‘…wrote about another group of Nephilim who didn’t mingle with man. They settled beyond the Sambatyon River and are hidden from us” which is even more folkloric and also that “They observe the commandments and are very holy, but it is written that they are eight feet tall.”

Well, the bottom line is that since we have no reliable physical description of Nephilim then we cannot even claim that they were even one inch taller than the subjective average.
Also, Nephilim did not make it past the flood—in any way, shape, or form—did not return—in any way, shape, or form—and never will. Thus, so much for their supposed “Roles in End of Days” which is utterly unbiblical.

See my various books on Nephilim and “giants” related issues for more details—including my all too fitting new book Nephilim and Giants: Believe It or Not! Ancient and Neo-Theo-Sci-Fi Tall Tales. 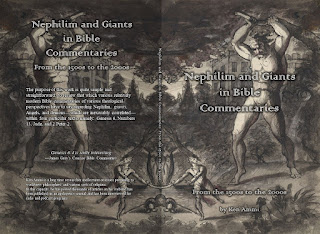