Below you will find the YouTube play list of the portions of this discussion. I also posted the portions individually from my non-YouTube video back up site.

On his site, Jasun introduced the discussion thusly: 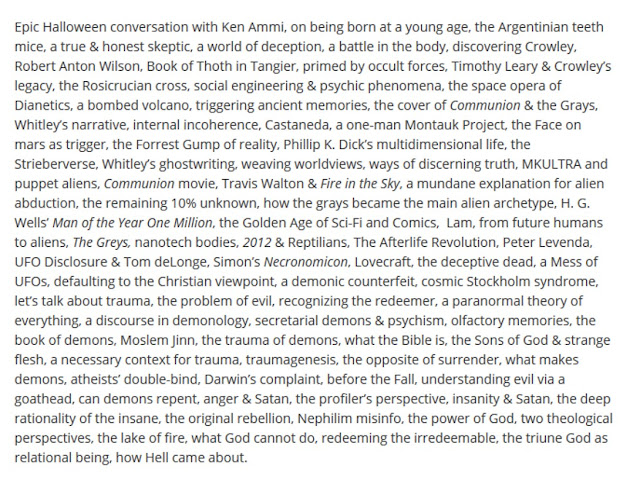 During our discussion, Jasun asked if demons can be benevolent and my reply was that they are not. Yet, that they are not may be different than they cannot be since perhaps they could be but chose not to be—to be or not to be…and all of that.

My view is that having rebelled, they hold on to their rebellion and do not give it up: they do not repent but constantly feed their rebellious (corrupted) nature.

I thought to make a few more points on this issue beginning with that demons can certainly give the appearance of benevolence. For example, the results of a stereotypical Faustian bargain would certainly seem benevolent and beneficial to Faust. He would conjure a demon, make a pact, reap the benefits (and hope to somehow abscond from even paying the piper). However, what true benefit, true benevolence can come from conjuring a demon in the first place since that act denotes corrupted sinful actions to begin with.

Thus, perhaps Faust would attain certain worldly pleasures from the deal but, after all, “What good is it for someone to gain the whole world, yet forfeit their soul?” (Mark 8:36).

“Satan himself masquerades as an angel of light” (2 Corinthians 11:14) in terms of delivering messages that are supposedly from God but are not. Thus, his messages would be taken as benevolent but are not.

Deuteronomy chaps 13 and 18 provides us with two tests of a prophet: if their prophecies come about and if they do not (with the former beings potentially as problematic as the latter), “When a prophet speaks in the name of the Lord, if the thing does not come about or come true, that is the thing which the Lord has not spoken. The prophet has spoken it presumptuously” and “If a prophet or a dreamer of dreams arises among you and gives you a sign or a wonder, and the sign or the wonder comes true, concerning which he spoke to you, saying, ‘Let us go after other gods (whom you have not known) and let us serve them,’ you shall not listen.”
I mention this because when I wrote about supposed alien contactee Billy Meier, his US rep Michael Horn contacted me in order to tell me how displeased he was with me and pointed to some of Meier’s allegedly alien inspired prophecies—which along with everything else he has ever claimed have been debunked 1,001 times.
Now, since my worldview differs from Meier’s and Horn’s then if Meier’s prophecies fail then I reject him and if they succeed but he says, as he in essence does, let us go after alien gods then I also reject him (see my book Fifty Shades of Gray Aliens for details on Meier).
Many benefits could come from following Meier (Horn has certainly enjoyed doing so) but the ends thereof are deception.

Lastly, here is a little discussion I had at his site: 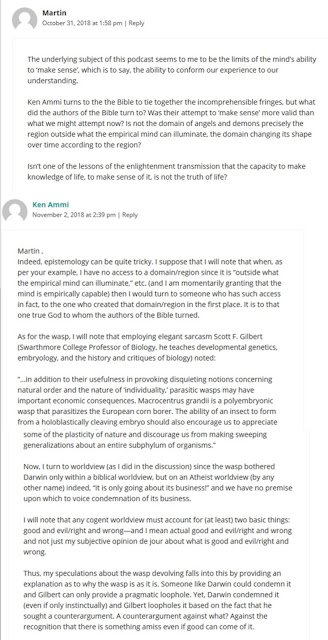 And with that in mind, enjoy the show.

Due to this discussion, a certain “TESTING 123” made the following comment on YouTube:
@ 1:25 your are wrong using this verse.
The scripture says “unclean spirits”, that’s completely different than a Demon.
They are two completely different subjects.
It is very common for Christians to just mixed everything together and blend all the characters into one name all the entities into one kind and super super Waterdown what the scripture actually says to the point where everything is so tremendously Vega nebulous there is nothing left of any true discernment or power. This is why Christians are so utterly powerless and clueless, they have done this to themselves and as usual- they blame others.

My reply:
I appreciate the tip but it is not so cut and dry. In any language, one word/term/phrase can mean more than one thing. In this case, it is not an issue of “demons” vs. “unclean spirits” since English translations differ: some have the discussion being about “devils” and some “demons” with Jesus referring to “unclean spirits.” In Greek, the discussion is about “daimonion” and Jesus refers to “akathartos pneuma.”
Consider the case of the Gadarene(s): they are said to have been “daimonizomai” and it is the same issue, reference is made to “daimonion” and Jesus refers to “akathartos pneuma” in Luke 8 and Mark 5 with Matthew 8 having “daimonion” and Jesus succinctly referring only to “pneuma.”
In my book “What Does the Bible Say About Demons? A Styled Demonology” I have separate chapters on evil spirits, lying spirits, unclean spirits, familiar spirits, daimonion and, daimon.

TESTING 123:
No, that’s certainly not true. I know from 50 years as a Christian this is the standard paradigm, but it does not make it true. A very large portion of the Christian belief system is completely aberrant and purposefully chaotic and distorted. There is nothing that’s true about telling lies and being untruthful, as well as trying to force something that is incorrect on purpose to be a truism… This is the common Christian paradigm.

My reply:
Well friend, this is not about chronology (“50 years as a Christian”) but about the quoted and cited facts I set before you which, for some unknown reason, you decided to wipe away with the mere assertion “No, that’s certainly not true” and, apparently, calling me a liar—in which case, you are playing mind reader.

TESTING 123:
You would benefit greatly by doing proper research about these subjects. The major problem that you and others are having is that absolutely everything is so badly improperly analyzed. This is done exclusively through “christian philosophy” dogma and not through reality, nor proper exegesis. It took 50 years for me to get out and I hope the best got you that your awakening is much more timely.
If you would like to discuss this further and perhaps maybe even an open debate I’m good for that… I would strongly suggest that you look outside of the ultra protected ignorance of the Christian dogma and paradigm. You’re being kept diluted and ignorant and unaware for the benefit of others and this is a quite shameful thing to allow yourself to fall into or others once you know the truth.

My reply:
I do not understand why you are being so confrontational and nonsensically so. For example, I presented you texts to consider which you merely swiped away with a “No, that’s certainly not true” rather than engaging the issue and you then made an appeal to your own authority “I know from 50 years as a Christian”: you claim to know but do not engage the issue.
So this time, rather than presenting a counterargument you again merely assert such as “badly improperly analyzed…‘christian philosophy’ dogma and not through reality, nor proper exegesis,” etc. when my reply to you was not philosophical but presented your texts. But you seem to almost be claiming some sort of Gnosticism since you have been awakened, I have not and yet, you seem to have nothing to offer but generic assertions. As for discussing it: that is what I have been begging you to do and we are supposed to have been doing so since you first commented (and yes, your initial comment was a generic assertion).
So, please re-read our discussion, pick out the points of fact and respond to those.

TESTING 123:
Ken Ammi Pardon me but the simple fact that I have more information than you, have studied these subjects in much greater detail than you and don’t agree with you means that I’m confrontational shows that you truly do lack insight and the willing to properly study your own Bible.

My reply:
So is “I have more information than you” an underhanded way to say: Gnostic? I ask for a couple of reasons including that it is literally impossible for you to know that you have “studied these subjects in much greater detail than” me. Yet, the issue is the facts and so, if I “lack insight” and you possess it then go ahead and address the issues rather than pounding your chest.

And that was the end of that since he did not reply again.