Hereinafter are considerations of some of the things that TJ Steadman wrote about Anakim in his book Answers to Giant Questions. You can find all of my articles regarding TJ Steadman here—including out debate.

The royalty connection is exemplified in the Anakim. The Biblical account tells us of some of the kings of the Anakim, the “sons of Anak.”

This terminology appears to have carried over from the Sea Peoples who gave rise to the Caphtorim, Emim and later the Philistines. “Anak” is not just a name but also a title, from the Greek anax, meaning, “king.”

It is one of the many titles of Apollo, who had a temple in Athens dedicated to the worship of the Anakes, protector gods similar to the Mesopotamian Apkallu.

The Bible tells us that the Anakim, or more accurately, ben ‘anaq, “sons of Anak,” were descended from a man named Arba, father of Anak, after whom was named Kiriath Arba (“city of the tree,” later Hebron).

This seems like a word-concept fallacy: just because in Greek anak/anax means or is used for king does not mean that the people group (especially all of them) were kings. Surely, they had kings over them and those kings may have been Anakim but Anakim are still named after a man named Anak. That is, unless TJ Steadman wants to claim that they are named after a person referred to as Anak because he was their king. Yet, that would only get us to that they are called the Kingly peoples and so, what of it?
So yet, “The Biblical account tells us of some of the kings of the Anakim” what of it?

Note also that in Greek we are dealing with Ενακ not Ἄναξ.
Ἄναξ is the Greek for anax.
Ενακ is Greek for Anak which refers to neck, necklace and in Arabic specifically the length of a neck.
Ἀνάγκη is the Greek for Ananke
Just because words sound similar in English (and perhaps even in the original languages) and are written similarly when transliterated in to English (and perhaps even in the original languages) does not mean they are related, mean the same or similar things, etc.

As far as I know, there are (plural) no Anakes (plural) protector gods (plural). Rather, Ananke (singular) is a self-formed primordial being, eventually personified in feminine form, whose outstretched arms encompass the cosmos. She is the mate of Chronos. Together they smashed the primal egg of creation, the piece of which became sea, earth, and heaven.

I included, “Appendix: On the Apkallu as per Amar Annus” in my book What Does the Bible Say About Giants and Nephilim? A Styled Giantology and Nephilology and review the various iterations of Apkallu and one thing is certain, they have nothing to do with the concept of Anakes who is not at all, “similar to the Mesopotamian Apkallu.”

TJ Steadman also wrote that the “translation in the LXX achieves more than just to inform us that the Anakim were tall by association with the Rephaim (translated ‘gigantes’ in the Greek). Because the same Greek is used to translate the earlier 6th century BC Aramaic ‘Naphilin’ (plural form of Naphila, which means ‘giant’) which was preserved in the Hebrew Bible as ‘Nephilim.’”

Part of the problem with this is what I noted above: just because giant and gigantes look and sound alike, so some extent, does not mean that Anakim were well, biblically they were tall (which is subjective, subjective to Israelite males who in those days averaged 5.0-5.3 ft.).
“Rephaim” is not even “translated ‘gigantes’” is it merely rendered as such yes, the Greek also renders “Nephilim as “gigantes” and also “gibborim” as “gigantes”—which just makes a giant mess.

The Greek gigantes means “earth-born” so even that “Anakim were tall by association with the Rephaim” due to the term gigantes is inaccurate—some Rephaim such as Anakim (a Rephaim subgroup) were tall and that is about all we can say.
As TJ Steadman noted, “the presence of giants within the population does not necessarily define the entire people group as giants” which is one of the times he is using the subjective, vague, generic English term giants to mean something unspecified about unusual height.

Yet, TJ Steadman wants to connect the following dots: gigantes is used to translate (render) the Aramaic “Naphilin” from “Naphila” (generally naphiyl) (he is claiming that “Nephilim” derives from an Aramaic root not the Hebrew one, naphal) “which means ‘giant’” as since, or so he wrongly claims, Rephaim are Nephilim 2.0 and Anakim have an “association with the Rephaim” ergo, Anakim are “giants.”

Yet, none of that works even if the term giants/gigantes meant something specific about unusual height since, as J. Edward
Wright, Ph.D. noted, “The term traditionally translated as ‘giants’ in both the Greek Septuagint (γιγαντες) and now in English is נפילים nephilim, a term based on the root נפל npl meaning ‘fall.’ It has nothing to do with size” and specifies that this goes for both Hebrew and Aramaic as “The root npl in Aramaic also means fall and not giants.”[fn]Shared within a private communique with me.[/fn]
Wright is himself the J. Edward Wright Endowed Professor of Judaic Studies and Director of the Arizona Center for Judaic Studies at the University of Arizona.

Since TJ Steadman has a theo-sci-fi view of Nephilim and Rephaim—and Anakim and Nimord and, and, and—then he thinks that Rephaim, being Nephilim 2.0, were a people group (more like a zombie horde) whom the grave cannot hold, return as demons, etc.
Such is why he claims, “Isaiah 26 has much to say about the Rephaim. Firstly, the use in verses 13-14 refers to the Rephaim as lords (or, kings), which supports the idea that the ancient kings of the world were empowered by the Rephaim, like Nimrod, Og, Sihon, Amalek/Agag, Arba, Anak and many others.”

Note the claim not just of Rephaim kings, which of course there were, but that kings were “empowered by the Rephaim” and he does not mean with military backing, financial backing or any such thing—he means spiritual/demonic empowerment.
I am also unsure how Nimrod was “empowered by the Rephaim” when Rephaim were not even close to existing in Nimrod’s day—TJ Steadman’s theo-sci-fi tall tales notwithstanding.

Just like Anakim are named after Anak, Rephaim are also named after one man, Repha, whose genealogy goes, “Benjamin begat Bela his firstborn, Ashbel the second, and Aharah the third, Nohah the fourth, and Rapha the fifth” (Chronicles 8:1).

Thus, with the exception of Nimrod: Og, Sihon, Amalek/Agag, Arba, and Anak are referred to as Rephaim because they were Rephaim. Yet, also, it actually supports the Ugaritic idea that the ancient kings of the world were later, once dead for a while, referred to as Rephaim—see Are Rephaim post-flood Nephilim? “Dead Kings and Rephaim: The Patrons of the Ugaritic Dynasty.”

As for Avims and Caphtorims, we are only told this about them biblically, which is in v. 23, “And the Avims which dwelt in Hazerim, even unto Azzah, the Caphtorims, which came forth out of Caphtor, destroyed them, and dwelt in their stead.”

As an FYI: Genesis 14:5 is the only reference we have to Zuzims and it does not specify if they were also an aka for, were accounted as, Rephaim, etc., “the kings that were with him [Chedorlaomer], and smote the Rephaims in Ashteroth Karnaim, and the Zuzims in Ham, and the Emims in Shaveh Kiriathaim.”
What is interesting about this verse is that it seems to distinguish between Rephaims and Emims but is seems to merely be utilizing two akas based on how they were known in different localities/by different peoples since “Rephaims in Ashteroth Karnaim, and…the Emims in Shaveh Kiriathaim.” 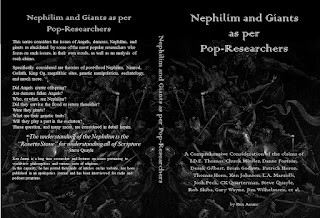