The strange story of John Podesta and his brother Tony being invited to one of Marina Abramovic’s Spirit Cooking sessions appears to be the mere top of an iceberg which is melting away to reveal some very troubling aspects about elitism in general.

You may recall at over a decade ago Donald Trump told Billy Bush about how he can just “start kissing” women and that “I don’t even wait. And when you’re a star they let you do it. You can do anything. Grab…” a very private part of their anatomy, etc. His point was that as an elitist, as a wealthy person, as a celebrity, a star, he is simply used to behaving in that manner.

Apparently, it is a mere coincidence that Podesta and Abramovic have an interest, to whatever degree, in cannibalism.

Well, this has all led to that which is being termed Pizzagate which pertains to the manner whereby it is said that elitists communicate with each other via symbols and code words. In my original article I noted that “Current news is that John and Tony Podesta look very much like police sketches of men suspected of having kidnapped Madeleine McCann.”

I also noted that I have no idea what this is supposed to mean or even in what context he was doing this. I wonder if he is
saying he just acquired 14 little Finding Nemos—paying off single parents for their children. 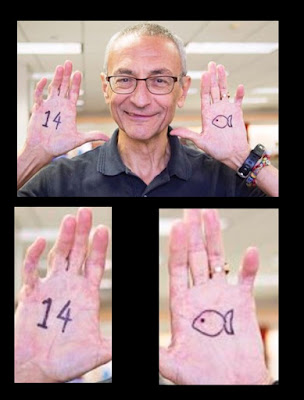 Marina Abramovic has made her view of human dignity and worth, particularly that of babies, clear in stating, “I had three abortions because children hold female artists back.”

Here she is in child domination pose and also in symbolism of keeping such activities in the dark, etc. 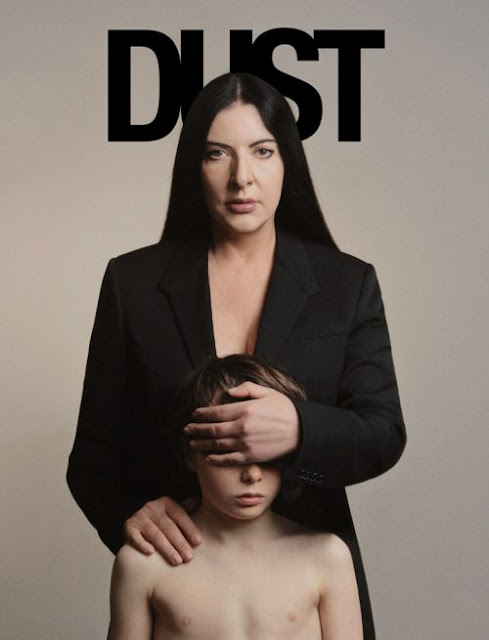 In the photos below Marina Abramovic is seen with Lady Gaga at a cannibalism themed event. Note Lady Gaga with a mere child at the same event (note the same dress) as apparently, elites bring their children (or, children they purchased or stole) to such grotesque depictions of inhumanity.

Tony Podesta once held a tour of his home and guests, and I quote, “got an eyeful when they walked into a bedroom” wherein were hung photos by Katy Grannan of “naked teenagers” the guests were “horrified” (Jessica Dawson, Married, With Art, Washington Post, September 22, 2004 AD).

Here is Tony with a sculpture of a terribly contorted headless body. Many have noted a similarity between this and photos that the serial murderer and cannibal Jeffrey Dahmer took of his victims. 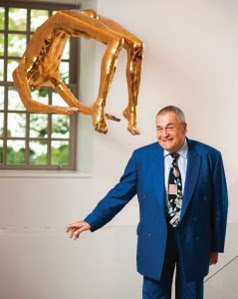 Here is a sample: 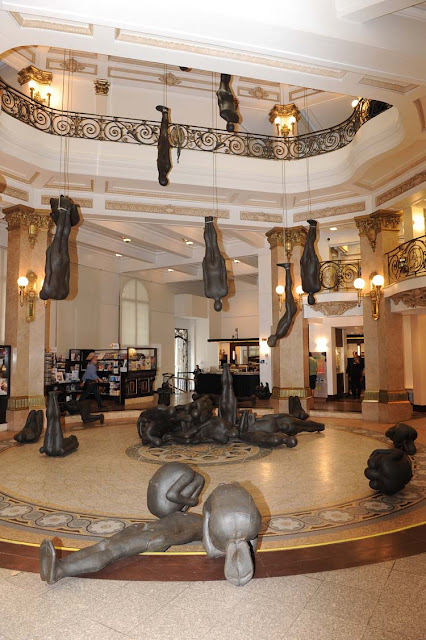 Some pieces by Vik Muniz—note the Medusa in pasta: in pedophile parlance pasta is secret terminology for sexually molesting boys as is hot dog and, FYI, chicken or chicken lover/chickenlover to pedophilia in general.

The worse comes from Biljana Djurdjevic. Djurdjevic noted that some influences are “German philosophy like Friedrich Nietzsche, Schopenhauer, Schiller, writers like Kafka, Bulgakov, Bela Hamvas, David Bowie.” Asked, “How do you dream up with your wacky ideas? What is your creation process?” she noted, in part, “maybe it is compilation of my thoughts that I collect through ordinary day…or seeing an other victim of paedophilia for this and other subjects unfortunately I didn’t need any imagination. Just a pure reality.”
She also stated, “I think I have compulsive behavior…the moment I finish work I don’t look at that canvas.” Asked “What is the strangest thing you have ever done?” her reply was “There is no such thing in my life; probably that is the strangest thing” (Parentela Claudio’s Interview with Biljana Djurdjevic October 18, 2007 AD).

Here are some paintings which depict occult ritual type poses such as those seen to be related to the movie “The Devil Rides Out” (and note the homage to Disney via the Mickey Mouse shirt).

What better way to allure and kidnap children than by having a pedophile dress up as Santa? 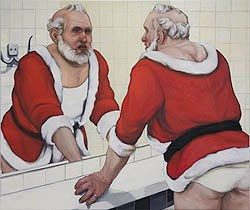 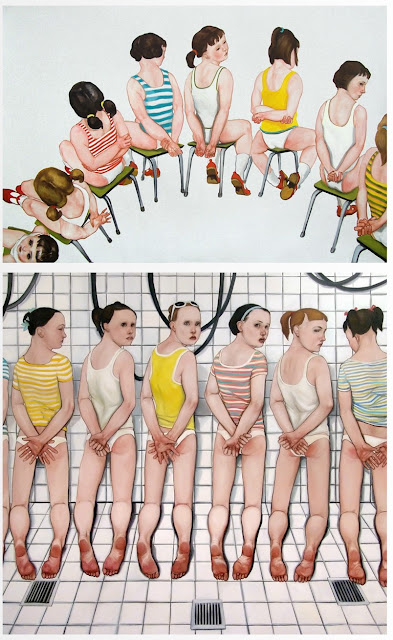 What else need be said? 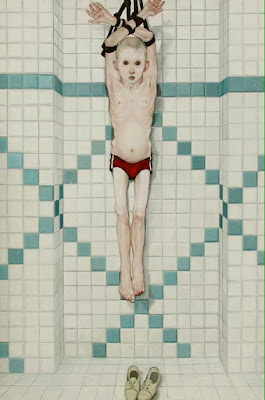 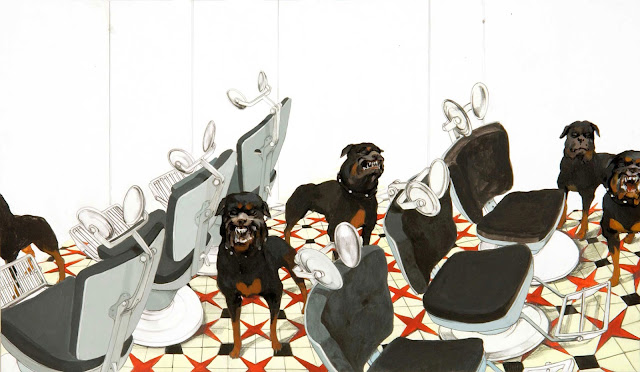 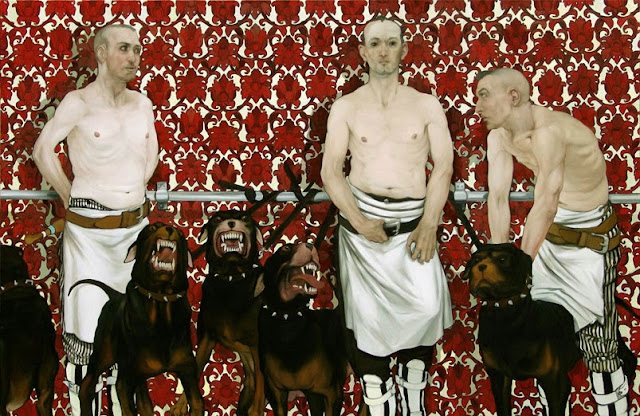 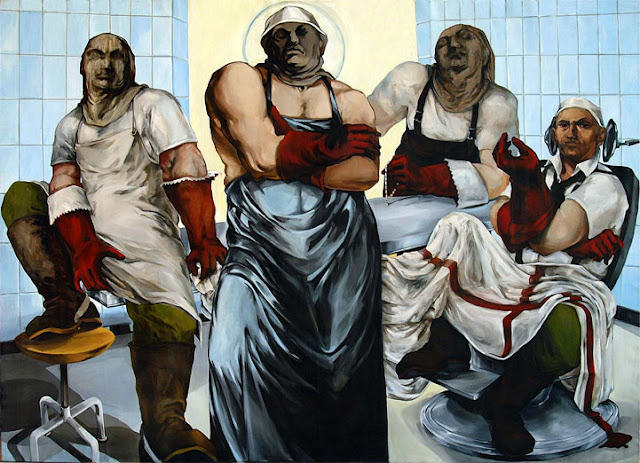 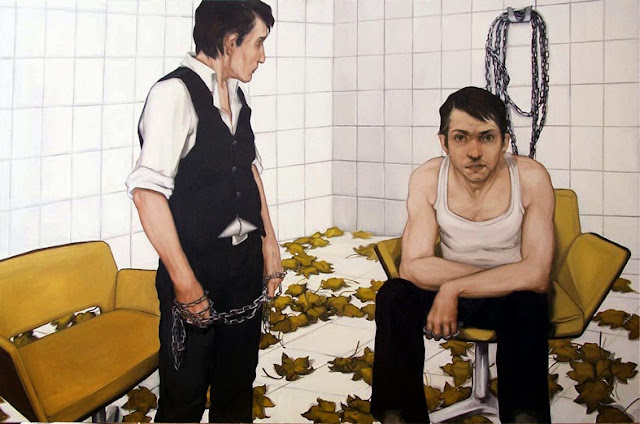 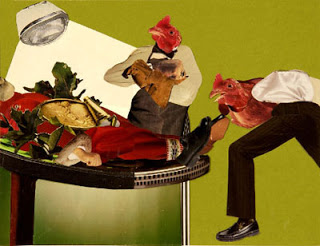 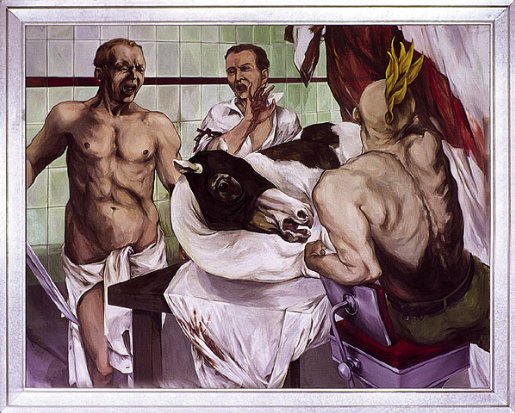 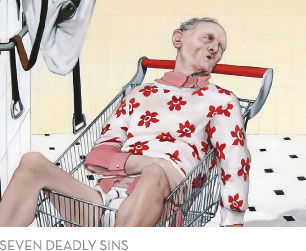 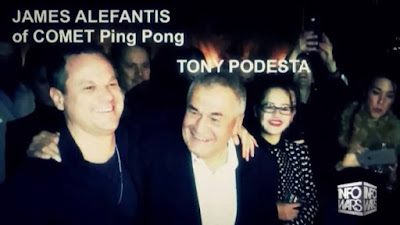 James Alefantis with buddy Tony Podesta. Alefantis has become a magnet in attempts to unravel pizzagate and is the very reason for the term pizzagate as he is the owner of “Comet Ping Pong Pizza.”

From the crescent moon and star motif one may think that it was Muslim owned but perhaps the imagery points to something else. 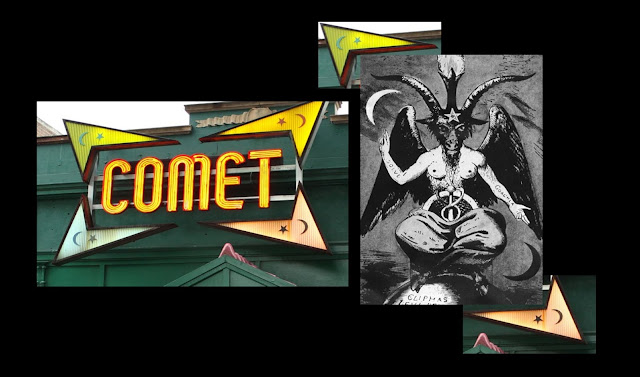 Then again, there is a Muslim Mosque style structure at the Little Saint James (St Thomas 00802, USVI). Interestingly, when you look up the island on Google maps a “Quick facts” section tells you straight up that “Little Saint James is an island of the United States Virgin Islands, located off the east end of St. Thomas. The island is privately owned by American financier and convicted sex offender Jeffrey Epstein.” So, perhaps there is some big Middle Eastern money behind some of this.

The pizza joint’s website stated, “…we offer a myriad of exciting activities and extras that no other birthday party will have…You can even rent out the whole restaurant! We are open to all ideas of course…type of party (kids, adults, or a mix of both).” 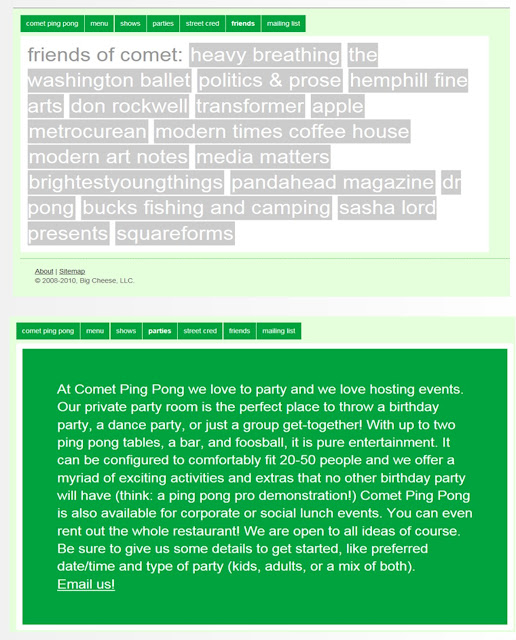 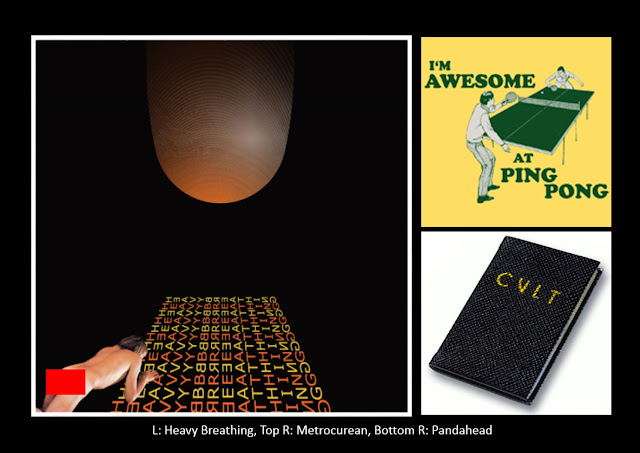 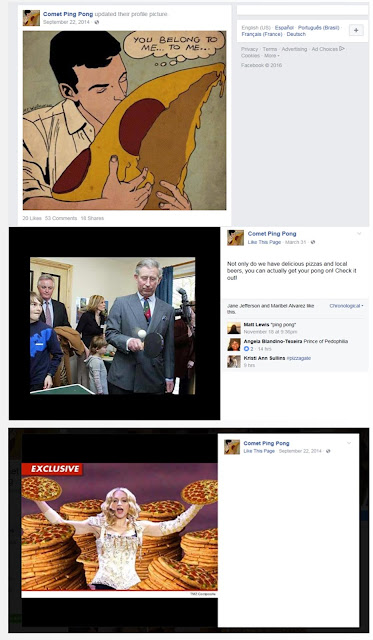 “Pizza” is pedophile parlance for “girl” and Madonna thinks that pedophilia is funny:
The Illuminati Card Game includes a “Pizza for the Secret Meeting”—note the listening/recording devices on the pizza: the better to blackmail you with. Also, the Pokémon Illuminati Pizza card, et al. 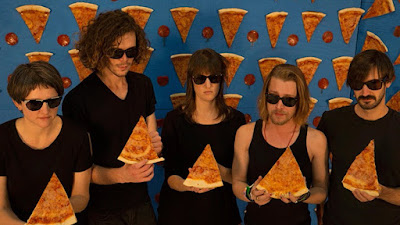 The Facebook page also displays flyers for the band that play at Comet and these seem to display a pattern. 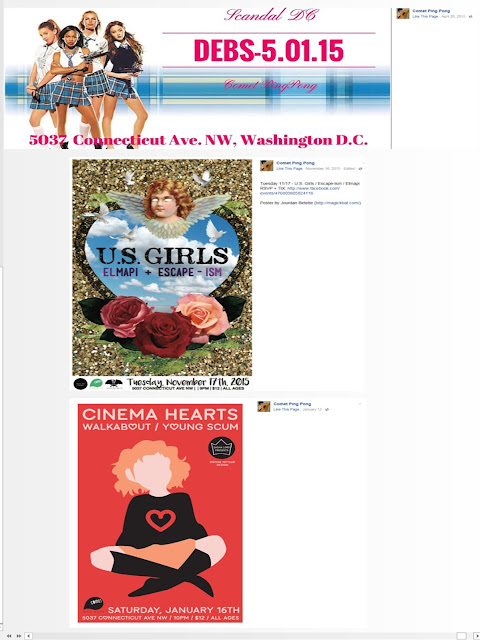 Those researching the pizzagate crimes know that the internet is being swept up very quickly with people un-following incriminating personages, deleting posts and, for example, Reddit shutting down its page devoted to that issue: as you can see, I attempted to post therein and was denied as the section has been taken down. 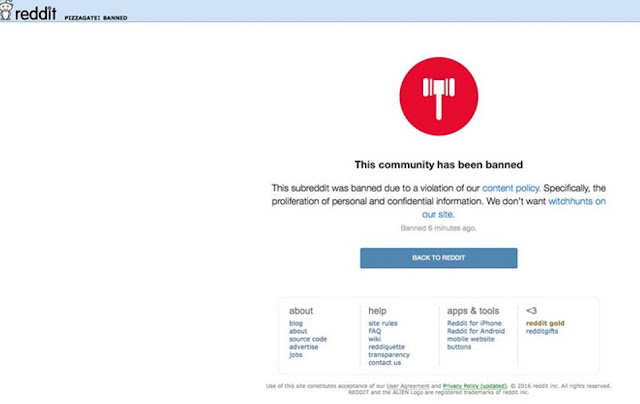 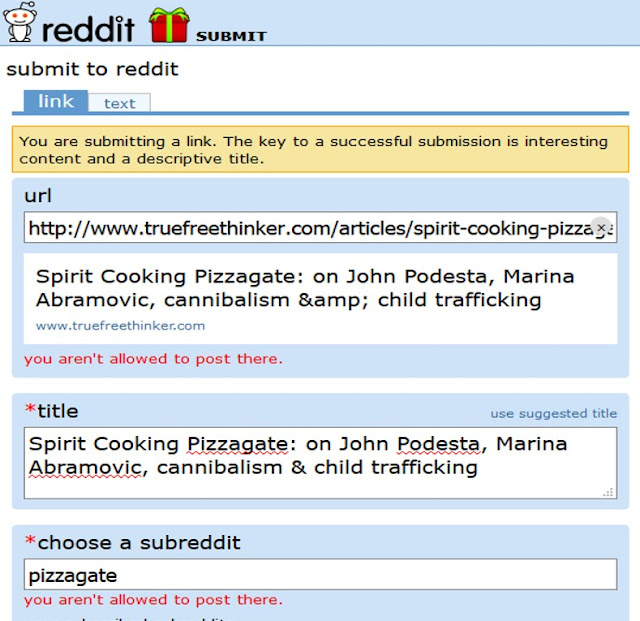