Find all segments in this parsed series here.

As of this week, the latest Zen-news is that he and John Baptist were going to discuss the “Soul and Angel Fall THEORY” whereby they would take “A look into the highly controversial theory of soul reincarnation and how it applies to our divine election from Father God.” So the Zenites will follow him right along, with suddenly begin saying that reincarnation is biblical, will pick half a verse here, two verses there, will appeal to very, very late dated Rabbinic folklore and Gnostic apocrypha and will claim that anyone coming against them have not had it revealed to them yet and are thus not privy to this Holy Spirit personal revelation mystery.

FYI: this is well in keeping with John Baptist who constantly has people on his show that supposedly receive allegedly personal revelation from the Holy Spirit and in a very Sibylline Oracles manner just spout off some inane, generic, statement which John always amens and praise the Lords.

Sounds like Zen never really left the new age paradigm. Like so many others he sees how profitable his fantastic speculations can be…I met him once…He seemed spaced out a bit then, but not like this. [ellipses in original]

His teaching are very easy to refute but I do believe that some are deceived however many would follow because it sounds nice to them. 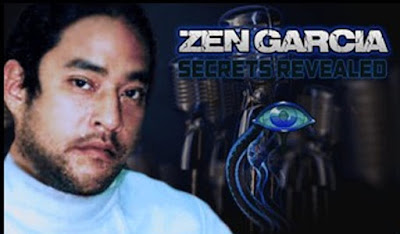 Well said, friend. Reminds me of this: “…to suit their own desires, they will gather around them a great number of teachers to say what their itching ears want to hear” 2 Timothy 4:3

Zen Garcia came back with:

Why are you trying to spread lies about me? First off I never ever taught that we’re reincarnated over and over through life and being. If you knew anything about my work you would know this as I wrote a whole book about it called Skyfall: Angels Of Destiny where I in several chapters refute reincarnation. Also John and I have not work together for over two years now. If you’re going to talk about me at least present my work in the way that I teach it.

If you think there’s money in writing books about what I write about you’re absolutely wrong. And If you think I’m doing this for the fame, you certainly don’t know anything about the work that I do. I did not want to get into a character debate but here I am having time away from my work to respond to all of these slanderous remarks. To anybody that does not know me, I have for years allowed my work to stand for itself. I challenge anybody that does not believe and is not willing to listen to any teaching on Cain being different from Abel to listen to this entire show and then decide for yourself. Don’t listen to all these detractors writing all the slanderous comments about me, they’re just trying to keep you from investigating it for yourself.
Truth can be found in this video for those that seek it. It is contained within this video and the many others that I do. Listen to the material, take it to the Most High God, asked Him if it is true. And then move on. If it happens to be truth for you, well and good and if not that is fine too. We don’t need to be bashing each other over this issue. It is not salvational. When did you ever meet me in Asheville? I’ve only been there once and just for the weekend with my girlfriend at the time. I didn’t meet anybody. Care to clarify? God bless you in your seeking.

The one who noted he met Zen relied with the when and where and noted, “I have no personal beef with you just with the literal interpretations you take from the material. Are you aware of Emanuel Swedenborg and his teachings?”

You seem to be combining comments to me and to [name withheld]. I see he replied on his portion so I will reply to mine. I am certainly not interested in misrepresenting you—what you actually teach is problematic enough as it is. Just the other day I received an alter to a website which announced your interview with John thusly, “Soul and Angel Fall THEORY” and “A look into the highly controversial theory of soul reincarnation and how it applies to our divine election from Father God” so perhaps he or someone else reposted it.

I do not speculate about money or fame but since you refuse to abandon certain anti-biblical views in favor of that which you have already published then you may consider whether you are now more interested in protecting your books rather than God’s. You would also do well to ignore slanderous remarks and focus on people who are actually pointing out how anti-biblical many of your claims are: that alone would be a full time job.

I have listened to many of your shows including your discussion with Dr. Pugh (who was concerned about the anti-biblical direction you have gone) and have very carefully considered your teachings on the serpent seed as well as the teachings on that issue by those who taught it many, many years before you: I have written 48 articles on that issue alone including one published in a Christian apologetics journal.

Lastly, there is no such thing as “truth for you” as that is subjective and God’s truth is objective and absolute. What you emotively term “bashing” is me pointing out to those who clearly need to know it that many of your views are not just un- or non- or extra-biblical but actual anti-biblical and contradict the Bible. Christians are called to do this and it is not right to ask me not to help other Christians better understand these issues.