Picking up directly from part 3, I begin by asking why Jesus would have been alarmed at the plans being taken to the gentiles? All that Prof. John Hartung and Prof. Richard Dawkins needed to do is read the New Testament, even just the four gospels, and they would have been shamed at their own ignorance. Consider the following New Testament reference to the above cited Leviticus 19:18, what is asked about it, and how Jesus responds:

Picking up directly from part 3, I begin by asking why Jesus would have been alarmed at the plans being taken to the gentiles? All that Prof. John Hartung and Prof. Richard Dawkins needed to do is read the New Testament, even just the four gospels, and they would have been shamed at their own ignorance. Consider the following New Testament reference to the above cited Leviticus 19:18, what is asked about it, and how Jesus responds:

“And behold, a certain lawyer stood up and tested Him, saying, ‘Teacher, what shall I do to inherit eternal life?’ He said to him, ‘What is written in the law? What is your reading of it?’ So he answered and said, ”You shall love the LORD your God with all your heart, with all your soul, with all your strength, and with all your mind,’ and ‘your neighbor as yourself.” And He said to him, ‘You have answered rightly; do this and you will live.’ But he, wanting to justify himself, said to Jesus, ‘And who is my neighbor?’ Then Jesus answered and said: ‘A certain man went down from Jerusalem to Jericho, and fell among thieves, who stripped him of his clothing, wounded him, and departed, leaving him half dead. Now by chance a certain priest came down that road. And when he saw him, he passed by on the other side. Likewise a Levite, when he arrived at the place, came and looked, and passed by on the other side. But a certain Samaritan, as he journeyed, came where he was. And when he saw him, he had compassion. So he went to him and bandaged his wounds, pouring on oil and wine; and he set him on his own animal, brought him to an inn, and took care of him. On the next day, when he departed, he took out two denarii, gave them to the innkeeper, and said to him, ‘Take care of him; and whatever more you spend, when I come again, I will repay you.’ ‘So which of these three do you think was neighbor to him who fell among the thieves?’ And he said, ‘He who showed mercy on him.’ Then Jesus said to him, ‘Go and do likewise'” (see Luke 10:25-37). 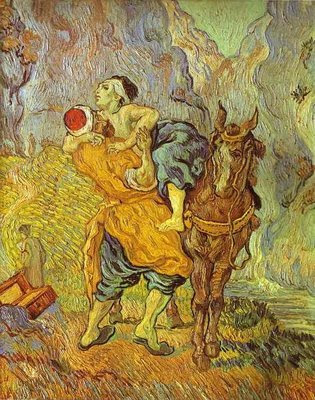 The moral hero of the story is not the priest, nor the Levite but a Samaritan a despised gentile. The attitude of the day is succinctly expressed by a Samaritan woman who was astonished that Jesus, a Jew, would have anything to do with her. She stated, “Jews do not associate with Samaritans” (John 4:9).
She even asked whether the proper place to worship is Samaria or Jerusalem. Jesus, in His typical form, does not get roped into the logical fallacy of a false dichotomy whereby one is made to think that there are only two possible answers, in this case either one location or the other, but finds the third way:

“‘Our fathers worshiped on this mountain, and you Jews say that in Jerusalem is the place where one ought to worship.’ Jesus said to her, ‘Woman, believe Me, the hour is coming when you will neither on this mountain, nor in Jerusalem, worship the Father. You worship what you do not know; we know what we worship, for salvation is of the Jews. But the hour is coming, and now is, when the true worshipers will worship the Father in spirit and truth; for the Father is seeking such to worship Him'” (John 4:20-23). 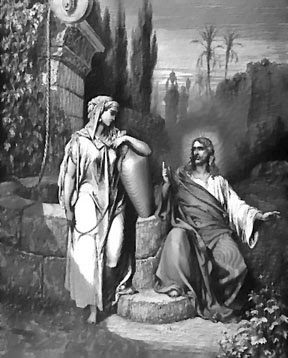 But Prof. Richard Dawkins keeps on getting himself into trouble by his, apparently, blind faith in his infallible interpreter:

“Hartung draws attention to the two verses in Revelation where the number of those ‘sealed’ (which some sects, such as the Jehovah’s Witnesses interpret to mean ‘saved’) is limited to 144,000. Hartung’s point is that they all had to be Jews: 12,000 from each of the 12 tribes.”[fn] Richard Dawkins, The God Delusion (Boston & New York: Houghton Mifflin Co., 2006), p. 258
[/fn]

You should actually read “the two verses” as “the only two verses to which we choose to refer, forget context and please do not keep reading past the two verses.” But which two verses? Dawkins does not bother citing them. You either take his word for it or conduct some research-how many of his adherents would do that? Revelation 7:4 states, “And I heard the number of those who were sealed. One hundred and forty-four thousand of all the tribes of the children of Israel were sealed.” Thus, there you have it. Unless you question everything and conduct your own research just as the Bereans are praised for doing. If you read all the way from verse 4 to verse 9-10 you will find the following statement:

“After these things I looked, and behold, a great multitude which no one could number, of all nations, tribes, peoples, and tongues, standing before the throne and before the Lamb, clothed with white robes, with palm branches in their hands, and crying out with a loud voice, saying, ‘Salvation belongs to our God who sits on the throne, and to the Lamb!'”

Many other examples could be presented, such as when Jesus went to Samaria and Galilee and healed ten leprous men only one of whom took the time to thank Jesus. It is specifically mentioned that this man was a Samaritan (see Luke 17:11-16). Yet, these suffice to demonstrate that, with all due respect to those more learned than myself, Prof. John Hartung should stick anesthesia, Prof. Richard Dawkins should stick to biology (observation and not his speculations) and Skeptic magazine should be skeptical about itself. We have clear evidence that two individual atheists and an entire publishing organization are guilty of, at least, lazy scholarship.