If Richard Dawkins is good at anything-besides vociferously displaying a lack of knowledge on a vast range of subjects-it is weaving quaint Victorian Era tall tales which he refers to as being an intellectually satisfied atheist.

If Richard Dawkins is good at anything-besides vociferously displaying a lack of knowledge on a vast range of subjects-it is weaving quaint Victorian Era tall tales which he refers to as being an intellectually satisfied atheist.

He has stated that his new book The Greatest Show on Earth: The Evidence for Evolution is “about the positive evidence that evolution is a fact. It is not intended as an antireligious book” and he, again, sets the bar very, very high in claiming that “No reputable scientist disputes it, and no unbiased reader will close the book doubting it.” Of course, “it” refers to “evolution” which is a term that he will hopefully define in the book as within the article from which I am quoting he does not do so.[fn]Richard Dawkins, “Creationists, Now They’re Coming For Your Children,” Times Online, August 24, 2009[/fn] Except for these hints, as he states that those who “deny evolution”,

Note, however, that from the get go he has established a line of demarcation: if a scientist disputes or doubts, even dares to doubt, whatever the Dawkinsian definition of “evolution” will be, they are labeled irreputable-on this basis alone; thus saith Dawkins.

Keep in mind that with regards to “assertions without adequate evidence” evolutionary biologist and geneticist Prof. Richard Lewontin referenced Carl Sagan’s list of the “best contemporary science-popularizers” which includes Richard Dawkins. These authors have, as Lewontin puts it, “put unsubstantiated assertions or counterfactual claims at the very center of the stories they have retailed in the market.” Lewontin specifically mentions “Dawkins’s vulgarizations of Darwinism” (his entire fascinating, eye opening and muse inducing article is found here).

If this book works as I intend, religious readers who open it will be atheists when they put it down.

He then downgraded his proselytizing goal to stating that it would turn people sitting on the fence post and already leaning toward atheism into admitted, out of the closet, atheists. Lastly, he simply stated that The God Delusion was meant to be a very funny book. I suppose that is what happens when you are writing a book from well-within-the-atheist-group-think-box. Apparently, once his book was dissected and had its very, very many fallacies exposed it went from the power to convert to the power of elbowing your buddy in the ribs while chortling (for other astonishing claims about their own books consider the claims of the New Atheists).

Despite his lack of definition, Richard Dawkins appears to be lightly hinting at something in his article. It may be difficult to discern his point but here is are his hints,

Considering that “evolution” is a fact one wonders what is to be made of those who do not accept it. Well, we already saw that any scientist who even dares to doubt it will be labeled irreputable. Yet, being the story teller that he is, Richard Dawkins begins the article with a slimily in which he likens evolution doubters with a “baying pack of ignoramuses” who display “ignorant prejudice” in claiming “that the Romans never existed.” He also envisages a scenario in which a teacher of modern history is “boycotted, heckled or otherwise disrupted by well-organised, well-financed and politically muscular groups of Holocaust-deniers” who make “belligerent demands.” And do not forget those “logic-choppers” and “brainwashed children.” 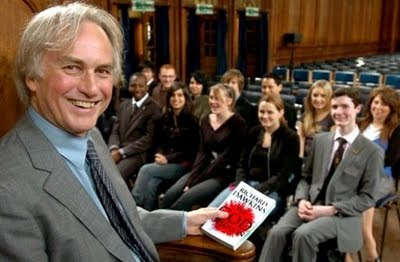 Having set the stage of ridicule he then draws a faulty correlation between Roman deniers, Holocaust deniers and evolution doubters-and another entry into the Reductio ad Hitlerum Awards files is born (and this coming from Richard Dawkins who denies that Communism is atheistic).

Now, if scientists are irreputable for doubting “evolution” (recall that this would amount to doubting that they are related to bananas and turnips) and those who “deny” evolution are tantamount to denying the existence of Rome and the occurrence of the Holocaust (for as he states it, “The evidence for evolution is at least as strong as the evidence for the Holocaust, even allowing for eye witnesses to the Holocaust. It is the plain truth”) what are we to make of those, especially those religious types, who accept it?
Well, these chosen ones, who have seen the true light of evolution, largely dodge Dawkins’ reproach and are sainted as,

thoughtful and rational churchmen and women accept the evidence for evolution…

the enlightened bishops and theologians…

Moreover, Dawkins himself collaborated with the Bishop of Oxford (now, Lord Harries) on an article which stated,

Nowadays there is nothing to debate. Evolution is a fact and, from a Christian perspective, one of the greatest of God’s works.

Dawkins is quite to note that “The last sentence was written by Richard Harries, but we agreed about all the rest of our article.”

Indeed, the light of evolution has shone and only the thoughtful, rational and enlightened will escape the wrath of Dawkins which is to come, and is now here. Indeed as Richard Dawkins writes in his Gospel of Evolution,

Evolution is within us, around us, between us, and its workings are embedded in the rocks of aeons past.

But, not so fast all yea thoughtful, rational and enlightened churchmen, bishops and theologians-you may yet lose your salvation if you fail to, get this, preach from your pulpits, your churches, your cathedrals in the manner that Pope Dawkins doeth bequeath,

All too many preachers, while agreeing that evolution is true and Adam and Eve never existed, will then blithely go into the pulpit and make some moral or theological point about Adam and Eve in their sermons without once mentioning that, of course, Adam and Eve never actually existed!

If challenged, they will protest that they intended a purely “symbolic” meaning, perhaps something to do with “original sin”, or the virtues of innocence. They may add witheringly that, obviously, nobody would be so foolish as to take their words literally…

Think about it, Bishop. Be careful, Vicar…Shouldn’t you take greater care, when speaking in public…Lest ye fall into condemnation…

No, I am not making this up.

Besides likening those who doubt that we are related to bananas and turnips with Holocaust deniers; Richard Dawkins has concocted two additional terms of derision: “historydeniers” and “40percenters”:

More than 40 per cent of Americans deny that humans evolved from other animals [and bananas and turnips]…I shall be using the name “historydeniers” for those people who deny evolution…I shall from time to time refer to the history-deniers as the “40percenters”.

asked if life developed “through an unguided process of random mutations and natural selection,” a standard definition of Darwinism, only 33 percent of respondents said they agreed with the statement. But 52 percent agreed that “the development of life was guided by intelligent design.”

As for the claim that evolution has never been “proved”, proof is a notion that scientists have been intimidated into mistrusting. Influential philosophers tell us we can’t prove anything in science.

Mathematicians can prove things – according to one strict view, they are the only people who can…

Even the undisputed theory that the Moon is smaller than the Sun cannot, to the satisfaction of a certain kind of philosopher, be proved in the way that, for example, the Pythagorean Theorem can be proved. But massive accretions of evidence support it so strongly that to deny it the status of “fact” seems ridiculous to all but pedants. The same is true of evolution.
Evolution is a fact in the same sense as it is a fact that Paris is in the northern hemisphere…

in most cases, we don’t live long enough to watch evolution happening before our eyes

This is a typical Dawkinsian tactic. Via misdirection and fallacious correlations he attempts to have his audience arrive at a predetermined destination which is that whatever “evolution” is, it is a fact; just like heliocentrism, just like that the Moon is smaller than the Sun, just like Paris being in the northern hemisphere.

This is so even though “we can’t prove anything in science” while he declares that “evolution” is a fact. Why, because “Mathematicians” not biologists “can prove things – according to one strict view, they are the only people who can” and mathematicians are constantly demonstrating that what is generally thought of as “evolution” simply does not occur-particularly related to the amount of time that it would require to happenstantially concoct even the mythical “simple” cell or even a strand of proteins.

…few can manage to keep up with adaptive devo punk-echthroi neo-quasi-Darwinism, or whatever the evolutionary biologists are calling this week’s spin on St. Darwin’s dangerous idea.[fn]Vox Day, The Irrational Atheist (downloadable here), p. 225[/fn]

Moreover, while generally we may not “live long enough to watch evolution happening before our eyes” we have watched hundreds of thousands, perhaps millions, of generations of fruit flies and have purposefully subjected them to mutagens. We have observed fruit flies end up with extra and useless wings, shriveled up wings and even legs on their faces but their “evolution” has, vastly, been deteriorative-devolution would be more descriptive.

Massive genetic differences were also found between different fruit fly species. The fruit fly is one of the most intensely researched organisms and in recent years a systematic study of the genomes of a dozen different species was undertaken. Evolutionists were surprised to find novel features in the genomes of each of these different fruit fly species. Thousands of genes showed up missing in many of the species, and some genes showed up in only a single species.[fn]M. T. Levine, C. D. Jones, A. D. Kern, H. A. Lindfors, D. J. Begun, “Novel genes derived from noncoding DNA in Drosophila melanogaster are frequently X-linked and exhibit testis-biased expression,” Proceedings of the National Academy of Sciences 103 (2006): 9935-9939[/fn] As one science writer put it, “an astonishing 12 per cent of recently evolved genes in fruit flies appear to have evolved from scratch.”[fn]M. Le Page, “Recipes for life: How genes evolve,” New Scientist, 24 November 2008. (found here)[/fn] These so-called novel genes would have had to have evolved over a few million years-a time period previously considered to allow only for minor genetic changes[fn]D. J. Begun, H. A. Lindfors, A. D. Kern, C. D. Jones, “Evidence for de novo evolution of testis-expressed genes in the Drosophila yakuba/Drosophila erecta clade,” Genetics 176 (2007): 1131-1137
And
S. Chen, H. Cheng, D. A. Barbash, H. Yang, “Evolution of hydra, a recently evolved testis-expressed gene with nine alternative first exons in Drosophila melanogaster,” PLoS Genetics 3 (2007)[/fn].[fn]Cornelius Hunter, “Darwin’s Predictions,” Copyright 2009, Version 2.03, Last updated: June 11, 2009[/fn]

In conclusion, we shall have to see what The Greatest Show on Earth: The Evidence for Evolution has to say. The only thing that we know for certain thus far is that “It is not intended as an antireligious book” and that “no unbiased reader will close the book doubting it.”