This is part one of an twenty-one part essay which provides a biblical response to a publication written by Rev. Dr. Mel White that was distributed door-to-door by “Soulforce Inc.” The publication is entitled “A Biblical Response to the Question People Often Ask…’How can you consider yourself a Christian when you are also gay?’ What the Bible Says-and Doesn’t Say-about Homosexuality.”[fn]Rev. Dr.

Twenty-one parts may seem like a lot yet, the purpose of posting it thusly is so as to make the information bite-sized and easily digested. I believe that you will find that while this parsed essay is about homosexuality it is premised upon hermeneutics. It is a lesson in being like the Bereans who checked what they were being taught against what the scripture stated and they were praised for doing so (see Acts 17:11). This is a lesson in how to think about what is being asserted and how to conduct research and discern truth from falsehood or accuracy from error.

The topics that I will cover in the entirety of these posts are as follows:

Part 1: The Premises
Part 2: Scant Mention of Homosexuality and Solomon’s 1,000 Concubines?
Part 3: Bible Silent on Homosexuality
Part 4: Non-Child Baring Not Abnormal
Part 5: It’s All Good…in the Beginning
Part 6: The Men of Sodom
Part 7: Galileo and Copernicus vs. Luther, Calvin and Melancthon?
Part 8: Too Literal or Not Literal Enough?
Part 9: The Holiness Code and Moral Relativism
Part 10: Did Jesus Address Homosexuality?
Part 11: To Judge or Not to Judge
Part 12: Turning the Truth of God Into a Lie
Part 13: The Fertility gods and goddesses
Part 14: Assumed That All Are Created Heterosexual?
Part 15: To Choose or Not to Choose-Impulse and Action
Part 16: When Widows Are “Ordered” to Have Intercourse
Part 17: The HIV/Aids Culture
Part 18: Homosexuals Are a “Distinct Class”
Part 19: Paul, Greek, Malaokois and Arsenokoitai
Part 20: Could You Be Wrong?
Part 21: In Conclusion

The Premises
Let us summarize the stated premises upon which Rev. Dr. Mel White has founded his statements.

“MY FIRST PREMISE: Most people have not carefully and prayerfully researched the biblical texts often used to condemn God’s lesbian, gay, bisexual, and transgender children.”

This premise is simply devoid of meaning since we are not made privy to what is meant by “most.” Has he performed some great survey of the world’s 2.5 billion Christians and 14 million Jews? Perhaps many people tell Rev. Dr. Mel White, “I never knew that the Bible really meant…” But as we will see in these essays this would not be due to what the Bible really says or does not say but due to Rev. Dr. Mel White’s misrepresentations, misinterpretation, misapplications and redefinitions. Keep in mind that “most” can mean 99% but “most” can also mean 51% and yet 51% is awfully close to half—we should not be impressed by an undefined appeal to “most.” The point being that the first premise is a baseless generic statement the point of which appears to be to impress us with the important work that Rev. Dr. Mel White is doing in vanquishing ubiquitous ignorance.

“MY SECOND PREMISE: Historically, people’s misinterpretation of the Bible has left a trail of suffering, bloodshed, and death.”

While tragically sad, this is accurately qualified as a reference to “misinterpretation.” This, however, does not mean that whenever the Bible condemns that for which we have a passion we ought to feel free to cry “Misinterpretation!”

“MY THIRD PREMISE: We must be open to new truth from Scripture.”

While it may be true that the more we learn the more we can understand Scripture’s accuracy and wisdom it is simply faulty to claim “new truth” whenever we want to justify something for which we have a passion but that the Scripture condemns.

May we likewise state, “The Bible is a book about God – not a book about human relationships” and thus we now understand that we do not have to love our neighbor? Firstly, the Bible is not “a book” it is 66 books. Yes, the Bible is a set of books about God and it defines God’s relationship with humanity and humanity’s relationship with God and each other through God’s guidance. I discuss the issue of God’s concern for human sexuality in my essay Too Sexy for My Theology?. Sex affects the lives of virtually every single human being who has ever lived and has done so in very, very many ways. Sex is not at all unimportant enough to ignore as an issue since sex is greater than the individual. It is more important than mere enjoyment or procreation. God would be neglectful if He did not address sexuality in its many, many forms from joy and procreation to abuse.

“MY FIFTH PREMISE: We miss what these passages say about God when we spend so much time debating what they say about sex.” 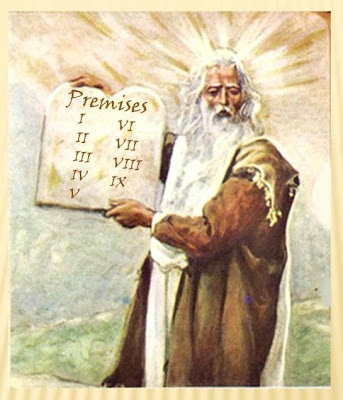 Rather, in learning what God has to say about sex and the implied human interaction we learn a great deal about God, His character and his concern for a very, very important and powerful aspect of humanity.

“MY SIXTH PREMISE: The biblical authors are silent about homosexual orientation as we know it today. They neither approve it nor condemn it.”

Throughout Rev. Dr. Mel White’s text you will surely notice constant qualifications. It would appear that he knows very well that the Bible condemns homosexuality and so he attempts to sidestep the obvious by referring to homosexuality “as we know it today.” And how does he propose we know it today? As normal, natural and a God approved and endorsed civil right.

“MY SEVENTH PREMISE: Although the prophets, Jesus, and other biblical authors say nothing about homosexual orientation as we understand it today, they are clear about one thing: As we search for truth, we are to ‘love one another.'”

Here is another wording of the qualifier “as we understand it today.” I would whole heartedly agree with the statement that “As we search for truth, we are to ‘love one another.'” Anyone who mistreats homosexuals for their homosexuality is hypocritically violating the manner in which Jesus dealt with the common person. After all “the wrath of man does not produce the righteousness of God” (James 1:20).

“MY EIGHTH PREMISE: Whatever some people believe the Bible says about homosexuality, they must not use that belief to deny homosexuals their basic civil rights. To discriminate against sexual or gender minorities is unjust and un-American.”

There is also room for agreement here with the qualifier that homosexuals ought to enjoy the same civil rights and not have special privileges. However, in part 18 we will see that Rev. Dr. Mel White claims that homosexuals are “a distinct class of individuals.”

Perhaps the premise which Rev. Dr. Mel White is most animated by is one that he does not list as a premise but one that is a comment which he refers to in the following statement:

“it’s important to remember that in every age, people of faith are responsible for setting moral and ethical standards that honor God. But we people of faith must be very careful not to allow our own prejudices to determine what those standards should be. Instead of selecting one item from an ancient Jewish holiness code and using it to condemn sexual or gender minorities, let’s talk together about setting sexual standards that please God – standards appropriate for heterosexuals and homosexuals alike, standards based on loving concern, health, and wholeness for ourselves and for others.”

This statement is very telling as revealing the mindset from which Rev. Dr. Mel White addresses the issue. His assertions are precisely reverse from the biblical worldview. Rev. Dr. Mel White appears to be preaching humanism with God, the Bible and Christianity as a facade.

This is the very epitome of eisegesis since he is coming to the texts with a particular desired outcome in mind. His ultimate premise is that “people of faith are responsible for setting moral and ethical standards that honor God.” Yet, the Bible teaches that it is God Himself who sets the standards and informs humanity as to what those standards are. He stated, “let’s talk together about setting sexual standards that please God.” Again, note the humanistic point “let’s,” meaning “let us,” or “us human beings,” set the standard. This view turns revelation on its head whereby instead of God revealing His will to humanity it is humanity that reveals its will to God, demands that God adhere to our morality de jour and besmirches any segment of humanity that disagrees.

Let us now begin our survey of Rev. Dr. Mel White’s assertions. I wish to make this essay into an exercise of sorts: let us set aside our opinions—let us proceed by making what I, you, and Rev. Dr. Mel White thinks about homosexuality irrelevant and let us focus on discerning his accuracy and simply ask “Are his claims accurate or not?”