As we progress, some statements I made before become inaccurate since the plot thickens. For example, we now learn that when the Ark crashed, it did not kill everyone onboard.

In terms of numerology, if, that is, such is what it is: the previous episode had a young man stating that they, the kids that Mother took from the Ark, are actually “13 years” older than they appear since they were in cryo-statis for that long.
A unique feature of the show is that “Their bodies travel in a state of hibernation, while their minds are able to interact with each other as if they were awake.”

We learn that the Mithraists view the new civilization they hope to establish as being “Our new Eden…It’s a new chapter. Praise be to Sol.”

Campion is beginning to have styled daddy issues as he tells the resurrected Father—recall that Mother had ripped his android heart out of its chest— “You’re not even my father. You’re just a generic service model” to which it replies, “Yes, Campion. And that is why I didn’t take Mother’s eyes” the ones via which it can change into the mass murdering Necromancer, “A generic service model cannot fully protect this family. Only Mother can do that. Nothing’s out there.”

Thus, we see a neo-trope of the weakling soy-boy male being subservient to the powerful female who alone can “protect this family.” This is a reversal of traditional gender roles within families—the very ones that have all but destroyed that which families are. 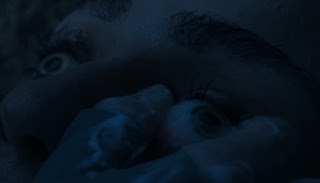 We are also seeing manners in which the script writer appears to be hinting at that he is employing Mithraism as a stand-in via which to bash Christianity since, for example, Mithraists are said to attend “church” and that “If there’s one true line in their big book of bull[****], it’s that you reap what you sow.” 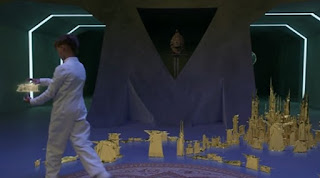 Of course, the well within the box Atheist group-think talking points du jour keep being uttered such as “He’s a smart kid. He’ll figure out a way to survive, okay?” the reply to which is “It doesn’t matter how smart he is if he thinks praying is gonna save him.”

We learn that the prophecy which was speculated to perhaps be speaking of Campion, in previous episodes, is called the “The Pentagonal Prophecy” which is about “an orphaned boy in an empty land.” One of the kids speculates, “That boy is probably Peter Valerius. I mean, both his parents were senior clerics. Oh, I guess we’ll have to wait and see.”

We also learn that Caleb and Mary (whose personalities, you may recall, were stole by Marcus and Sue) raised their son Paul in a very detached manner, only really speaking to him about Mithraism. Marcus and Sue, in the guise of Caleb and Mary, begin to engage this child who is a stranger to them and he is taken aback by it.

At one point, he asks “Do you think I would have been a good soldier, if I had to fight in a war?” to which the Caleb replies, “Yeah, buddy. You would have been great. But our side didn’t draft kids. Only the atheists did that”—recall that this is the crypto-Atheist speaking. 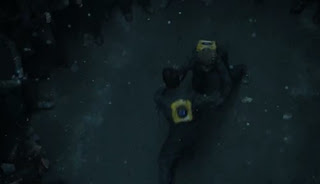 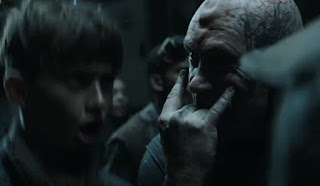 We are introduced to a character named “Lucius” the meaning of which should be obvious: if it is not then, note that the United Nation’s official publishing house was called “Lucifer Trust” until it was changed to “Lucius Trust.”

The plot may thicken on this later but for now, we only know that Lucius tells Caleb, thinking he is Marcus, “You fought with my father on Earth in the Battle of Boston. His name was Malius” and when Caleb replies, “Yes. Good man” since he has no idea about any of this, since he is not actually Marcus, Lucius replies, “So, you have forgiven him?” to which Caleb replies, “Is that not what Sol teaches us?”

We also learn that “Mother can make you see things when she wants to scare you” which is a form of an occult science of causing illusions.

Aboard the Ark were styled twin androids and when one of them dies the other humms a certain hymn. This enrages Caleb and the following discussion ensues:
Caleb: Stop. Unless your sister was an atheist, you’re singing the wrong hymn.
Android: The hymn is not just for those whose souls are beyond saving, Captain. It is also appropriate for those of us who never possessed a soul, like my sister. It is to reassure the living that nothing important has been lost, that Voreena is only material.
Caleb: I don’t need reassurance from you, robot. Stop.

The Ark’s leader chimes in with: Is there a problem with my android, Captain?
Caleb: There’s no problem, Your Eminence.
His Eminence: I thought you men of war enjoyed hearing the hymn for the soulless.
A certain Bartok replies: Yes, Your Eminence, we surely do. We used to sing it after atheist executions. It’s the sound of victory, a most beautiful song. Beautiful.

Thus, Caleb was disturbed by it since he is an Atheist but he plays it off thusly, “I was afraid the sound might bring back the necromancer, Your Eminence.” 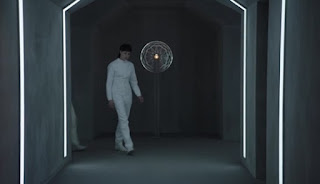 The Mithraists proclaim “Sol would not abandon his children” and, apparently, neither would an Atheist android.

We learn that their main food source, which they call “carbos,” comes from a plant that will only grow on ground directly under which are dead styled gigantic serpents which, or so we are told, are now extinct on the planet. Thus, life comes from the serpent—yet, not really since, as it turns out, these plants have been infected, as it were, by the serpents since the carbos become naturally radioactive and cause the death of all of the kids except for Campion.

You see, Mother had been concerned that it had somehow caused their deaths—perhaps on one of its styled-false goddess Kali’s berserker rages—but Father ends up finding out that it was due to irradiation of the carbos and states, “Mother, it wasn’t you. You are a good parent. Omnibiotics. Give them to the children as soon as you find them. They’ll help counteract the effects of the radiation.”

Father in Baphomet, as above so below, pose 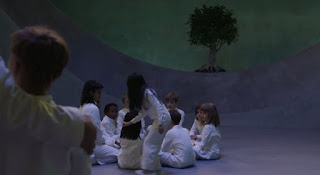