While the issue with Mother’s eyes still remains mysterious, in this episode it states, “I can’t weaponize without my eyes,” so that it seems to have removed them in order to regain self-control before going blindfolded into the room where the kids were in the Ark—or some such thing. Father asks, “You’ve destroyed them?” to which Mother replies, “No. We might need them again later.”
Mother also stated, “My original eyes had to be removed, for the sake of the children” (meaning Campion and the five new ones she acquired) which hints at it being afraid of losing control if it always has access to them.

Mother states, “the Mithraic that came here turned out to be every bit as vicious and terrible as our creator programmed us to believe. They tried to kill me in front of Campion.”
Note the admission that the androids were not only artificially programmed to be Atheists but to consider theists to be their viciously terrible enemies—and yes, even programmed Atheists recognize they have a “creator.” 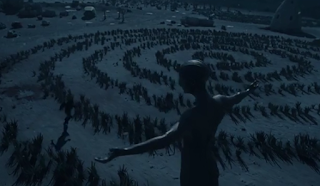 Mother in crucifixion pose as it flies/floats

Yet, we end up finding out that Marcus is not really a faithful Mithraist. As with many occult and Transhumanism related tales, many characters have biblical names and/or otherwise very meaningful names.
Marcus means “to harvest” and refers to the god Mars. In this episode we meet Caleb (from the Bible’s Book of Numbers, et al., meaning faith, devotion, wholehearted) and Mary (Jesus’ mother) who are seen in a flashback battle on Earth. They must be Atheist since whenever they encounter another human who states, “We wear the armor of Mithras and the Light. We are shielded from all that is harmful” they are shown, as it were, demonstrating Atheism’s victory by blowing them away–to death.

Along the way, Caleb stops to ponder a painting which if I had to guess, and I do, depicts the myth of Mithra being crucified upside down with the Sol resurrecting him–or some such thing. 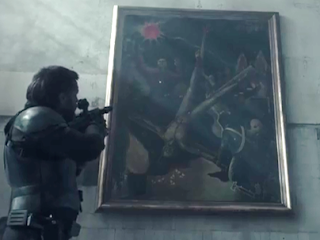 They recognize that their only chance of surviving the apocalyptic Earth is to get on the Ark. Thus, they commandeer a medic android who performs reconstructive surgery on them to make them look like Mithraic soldiers, they then run into the two people whom they were made to look like and after the ol’ “We wear the armor of Mithras and the Light….” blow them away.
In one scene they are seen practicing the Mithraic catechism “Why does He allow us to suffer?” “He tests us.”
They make it onto the Ark: after, that is, picking up the couple’s son and partaking in a Mithra version of communion/the Lord’s supper/eucharist.

Meanwhile, back to your regularly scheduled timeline: Mother is telling her newly acquired kids, “there is no religion permitted here, Mithraic or any other kind, so before we eat, you will need to give me your [Mithraic Solar] pendants. These are weights you no longer need to carry.” 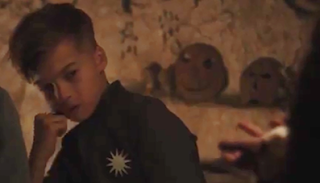 Not the occult smiley face just to the right of the boy
I wrote a whole chapter on this, surprisingly, most occult
of symbols for my book “The Necronomiconjob, Liber IV:
Sci-Fi Books, Comics, and Video Games” which is titled
“The Dark Occult Side of the Happy Smiley Face”

One of the kids tells Campion, “She’s a Necromancer. They’re built for mass extermination. She probably did it without even knowing it. If you think that male android’s [Father] gonna protect us, forget it. He’s a generic service model. Necromancers eat those for breakfast. You see, androids, they were built to protect us, to do our dirty work, so we can stay pure. If they had feelings, they’d be useless. Have you ever seen how they look when they don’t know they’re being watched? See, the reason why they don’t want you to believe in Sol is because they’re afraid of what it’s gonna open your eyes to, the power it will give you. Do you want to pray with us?”
Campion replies, “You know I’m not allowed to. And neither are you. If Mother catches you, she’ll…” so the kids asks him to keep watch for her while they pray.

The reference to “how they look when they don’t know they’re being watched” seem to be to the ritualistic pose and actions Mother is seen taking on such occasions, into which I got in reviewing episode one. 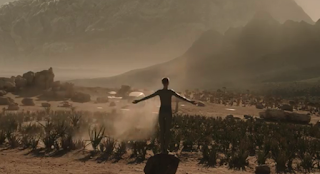 During an Atheist catechism session with the kids, Mother it weaving tall tales about evolution, “Now close your eyes. Close your eyes. I want you to think back to a time before humans gained their sight, when you were all just blind, simple organisms, floating in the vast oceans of the Earth. The warmth of the star drawing you to the surface.”

When Mother discerns that one of the kids (seems to be mid-teens) is pregnant, we get a taste of the abusive priest trope with a conversation that goes thusly:
MOTHER: You need special care, constant monitoring. There’s too much at stake to take any chances.
KID: Take chances with what?
MOTHER: You have been given the greatest gift that can be given. What’s the matter? Am I scaring you?
KID: No. It was against my will. While I was inside the shared simulation [the holo-deck I mentioned in the previous episode’s review]. The man who did it was able to wake himself up somehow, had his way with some of us while our bodies were still in hibernation. There were plans to execute him. Thanks to you, he probably died a few days earlier than scheduled. I would thank you, but I was actually looking forward to watching him die. He was a Heliodromus [Courier of the Sun, the Sol in Mithraism], the second-highest ranking member of our church. The thought that there’s something part him growing inside me, it makes me want to die.
MOTHER: Then you must not think of him. Think only of the child. The child is innocent. I will help you. We’ll do this together.

At least even an Atheist android realizes that if person A commits a crime it is unethical to brutally murder innocent person B in the womb.