Here are a few images from the show’s into to get us going:

Here are a few images from the show’s into to get us going: 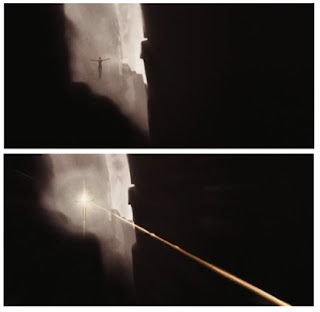 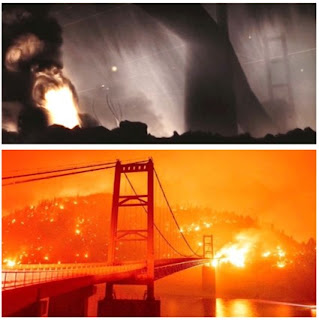 About the styled hallucinatory vision of sorts, Father tells Mother, “I saw something” but that “I don’t know” what is was and “I could never seem to catch it.”

Mother asks, “Are you experiencing some kind of sensory malfunction?” to which Father replies, “My senses are functioning normally, but I cannot be everywhere at once” and we are back to the ongoing issue of the female being more capable than the male, with Mother stating “I accept your limitations, Father…The limitations of your processing power.”

Father replies, “Limited as it may be, you know full well that I devote every ounce of my processing power to the well being of this family, and to trying to make you happy, Mother” to which Mother replies, “We’re not human. True happiness is not an achievable goal” and Father states, “Well, perhaps it’s a symptom of my inadequacy, but I believe it is.”

As the Mithraists who survived the crash on the Ark of Heaven seek their children, whom Mother had kidnaped from their craft while it was orbiting the planet, they find that Otho survived: he is the one that raped women in their sleep, which included children whom he raped while they were in stasis.

His explanation of his actions were, “Sol commanded me to be fruitful.” This is actually an Atheist view since some top Atheists have argued that rape played a beneficial role in human evolution—see here and here. 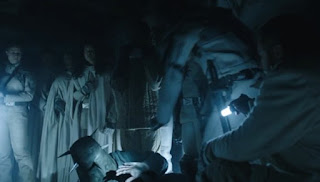 They find an android accompanying Otho who is identified as “Limiting Emergency-Automated Servo-Habit” as in “LEASH” and which states, “I’m a mobile prison system. Do not worry, sir. He can do no harm as long as I’m installed.”
It is elucidated that “The android is inextricably bound to the helmet the prisoner wears. Tamper with the helmet, it crushes the man’s head. Mess with the android’s programming, it crushes the ma’s head. Drag the prisoner out of range of the android…” a sentence which someone finishes with “Could it be, crushes the man’s head?” Indeed, just like Jesus is to crush the serpent’s head (Genesis 3:15).

Caleb/Marcus has the following discussion with Otho:
OTHO: I don’t pretend to know His reasons. I’m merely His servant.
MARCUS: So, you never done nothing like that before? Before you heard his voice?
OTHO: I never had any reservations about using inferior beings to satisfy my desires. Perhaps that is why Sol chose me for the task.
MARCUS: So, you’re just a scumbag? He never spoke to you.
OTHO: I swear that he did. But since they convicted me, he’s gone silent. He whispers in your ear now, Your Eminence. Take care you don’t disappoint him, or he may leave you, too. Lower thy radiance from above into our inward hearts. 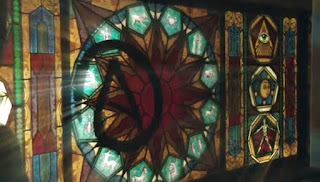 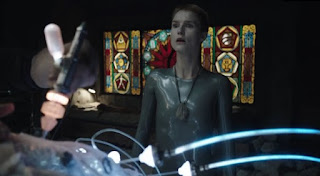 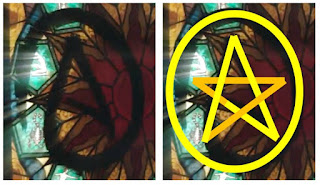 This episode features some of Mother’s Mithra-high-tech induced holographic memory experiences as it recalls memories previously unrecalled by it. It knew all along that its creator was Campion Sturges (after whom Mother had named one of the kids) who is known as “The Atheist hacker.”

Yet, Mother’s memories of the time it spent with him were hidden by MK-Ultra-like walls of amnesia.
Mother now recalls that he told it, “This is the reason for all my work. This is the reason why I created you. This, and you, are the future of humanity….Inside this craft are a number of frozen human embryos. I’ve modified your body so you’re capable of bringing them to term once you land on Kepler-b….You will raise these children to be atheists. The new world that you start won’t have the same problems that ended our world here on Earth. You are humanity’s last hope.”
This is quite rich considering that in our real world, Atheists set the mass and serial murdering world’s record in mere decades—see here.

Note a common Atheist misuse of language: Campion did not create Mother rather, he encountered her flying about in the Necromancer state, shot her down with some sort of directed energy weapon, and only re-programmed her—repurposing is not creating from scratch.

He would not be going off-world with Mother since he was dying of we know not what. He tells Mother, “I’m going to remove the memories of our time together” but when Mother replies, “No. I’ll lose you” he replies, “All right. I’ll archive them, then. You can retrieve them if necessary” and tells it, “Go now. Start over. You are the new Mother of humanity. Save us.”
Thus, as I noted initially: Mother is the styled high-tech Atheist android Eve.

Recall that one of Mother’s abilities is healing. We see this when at its command of “sleep,” the kids do so (in hypnotic suggestion style) and it cuts into their ankles with a scalpel it made from the golden Mithraic Sol necklace charms it took from the kids.
Mother did this so as to remove locator devices they had implanted into them—so that the Mithraists would not find the kids. 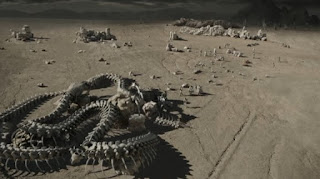 Recall also that Campion was, for some reason, able to eat the food source called carbos but no one else could since it was naturally irradiated.
Well, the kids ended up eating creature meat but Campion states, “Paul and I are only eating the fungus” which they had found and discovered as a new food source, “The rest of you should do the same. It tested safe, and it’s fairly nutritious. And you don’t have to kill anything to get it.”

This is interesting in two directions:
1) As recorded in the Bible’s Book of Daniel, when Daniel, et al., were captured and taken to Babylon, “king assigned them a daily portion of the food that the king ate, and of the wine that he drank…But Daniel resolved that he would not defile himself with the king’s food, or with the wine that he drank” and so states, “let us be given vegetables to eat and water to drink” (Daniel 1:5, 12).

2) This is propaganda in the neo-hip vegan trope style. Now, if someone wants to be a vegan then that is wonderful (I was a lacto-ovo vegetarian myself for seven years) but that issue is becoming a socio-political one and the fact is that “the Spirit expressly says that in later times some will depart from the faith by devoting themselves to deceitful spirits and teachings of demons, 2 through the insincerity of liars whose consciences are seared, who…require abstinence from foods that God created to be received with thanksgiving by those who believe and know the truth” (1 Timothy 4:1-3).

We also learn that, like Father had, Mother also has visions of Tally—one of their deceased kids. 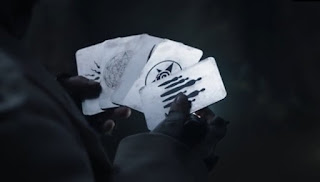 It is discovered that an as of yet unknown someone
is also living on the planet (prediction: it will be a less
evolved creature, meaning still more human that creature)
in the abode of which these symbol rich cards are found