Having written the book Raised By Wolves: War of the World-Views—An Examination of Season One of the Aaron Guzikowski and Ridley Scott Show, I thought to offer some notes of the graphic comic written by Aaron Guzikoski—who wrote the show’s script as well. 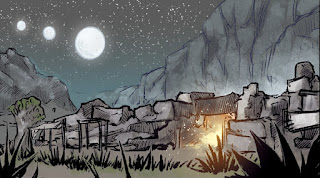 Note that the sky of Keppler-22b is always depicted as featuring three celestial bodies: a riff on the Trinity or otherwise some sort of triad.
In the show, Mother looks up at this sky when giving birth to a serpent that comes out of its mouth, whilst one of these celestial objects is especially bright. 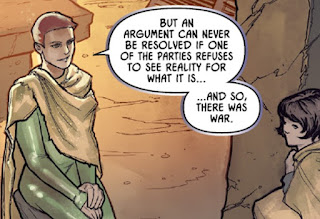 Mother is teaching the kids that “an argument can never be resolved if one of the parties refuses to see reality for what it is…and so, there was war.”
This war to end all wars (at least on Earth), led the Earth to be destroyed and/or otherwise inhabitable which is why the planet Keppler-22b is being inhabited.

Now, Mother is the android character that was re-programmed to “think” as an Atheist. It was blaming the Atheists’ antagonists, the Mithraists, for this war and destruction.

Now, it is arguing that Atheists could “see reality for what it is” which implies a sect/denomination of Atheism that positively affirms God’s non-existence (without evidence, of course).
Also, its premise is that we must adhere to reality and yet, on an Atheistic worldview reality is accidental since it was not created via design. The problem at this point is that there would be no imperative to adhere to the accidental byproducts of a cosmogenic accident.

Thus, its entire case falls apart and results in that the Atheists actually had not cogent reason(s) for engaging in such a war and so the destruction of the Earth was their fault. 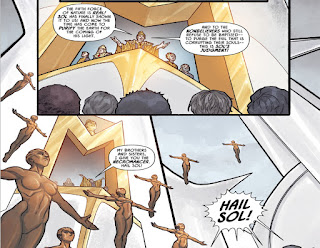 A scene depicts a Mithraist leader stating the following in the year 2120, “…the time has come to purify the Earth for the coming of his light.”

Thus, “to the nonbelievers who still refuse to be baptized” which is part of how the show uses Mithraism as a stand in for besmirching Christianity, are to be “purged.”

Necromancers, such as Mother, make their big reveal to the shouts of “HAIL SOL!” 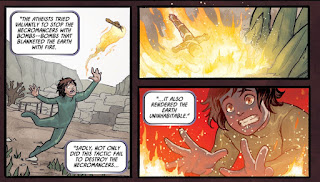 Back to the show’s present time, the kids are playing as if the Mithraists’ Necromancers are coming after them.

At this point, they do not know that Mother is really a Necromancer who was also re-programmed to be a mother to them.

They state, “The believers” the Mithraists, “claimed the technical specs for the Necomancer were encrypted within their most ancient scriptures” which is in the show yet, they continue with, “But it’s far more likely they stole the technology from one of the many Atheist nations they conquered” which is not in the show (but perhaps will be—?).

Note that the kids are playing with torches in the shape of burning crosses—with a close up of a burning upside-down cross. 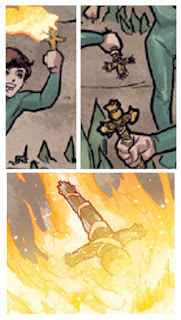 Mother and Father, a non-Necromancer service model android, discussion how the children are disobedient and decide to concoct tales of a “boogeyman” which would be that Necromaners are actually “attracted to bad behavior.” 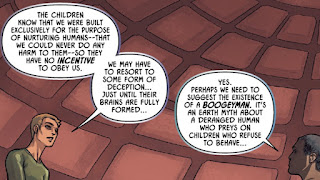 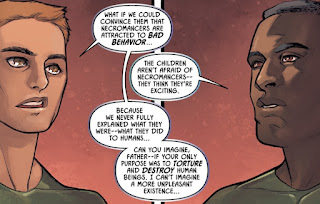 Yet, after he has a nightmare, Mother ends up telling one of the kids, “The Necromancers will never leave what remains of Earth…Father and I were just trying to keep you from misbehaving.”

Thus, the cat is out of the bag yet, not really since it is a Necromancer who just told him as much. 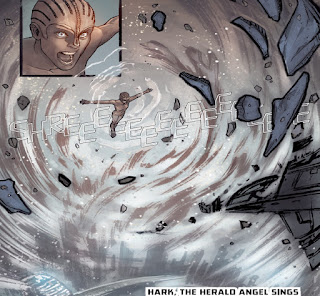 Lastly, note that this comic is titled “Hark, the Herald Angel Sings” and it is clear that the Necromancer is being referred to as an Angel and that the death-dealing shriek it lets out is the song. 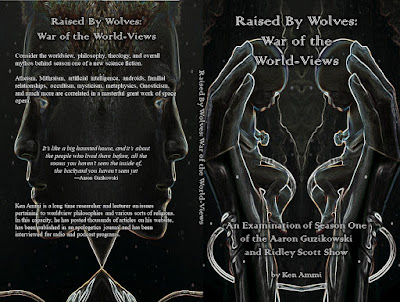