It is with some heaviness of heart that I must note that, as evidenced below, some extended sections of Stephen Quayle’s book “Genesis 6 Giants” have been plagiarized.

Quayle and I are both supposed to be Christians as well as authors, so this is doubly troublesome since both of these labels imply ethical integrity.

My investigation of Quayle’s book began as research for the latest of my books on Nephilim and giants, namely, Nephilim and Giants as per Pop-Researchers.

It is with some heaviness of heart that I must note that, as evidenced below, some extended sections of Stephen Quayle’s book “Genesis 6 Giants” have been plagiarized.

Quayle and I are both supposed to be Christians as well as authors, so this is doubly troublesome since both of these labels imply ethical integrity.

My investigation of Quayle’s book began as research for the latest of my books on Nephilim and giants, namely, Nephilim and Giants as per Pop-Researchers.

I read over various pages of Quayle’s website genesis6giants. Along the way, I encountered an e-version of a book by another author and noticed similarities.

I contacted Quayle via his website merely to un-accusingly ask if the contents of his website were chapter samples from his book. Yet, I received no reply.

I sought to contact the publisher “End Time Thunder Publishers” but can only imagine that this is the title of Quayle’s own self-publishing endeavor since I could not find any company info, and, thus, no contact info.

I also reached out to Gary Stearman and Bob Ulrich’s ministry website “Prophecy Watchers” since they carry many of Quayle’s books, DVD’s, etc. and have a longtime relationship with Quayle, but I received no reply.

I give them the benefit of the doubt, however, since contacting someone on their website does not ensure they received the contact notification. In other words, I’m not saying they refused to reply.
All I can state is that I made my attempts.

In my book I only noted that vast portions of Stephen Quayle’s website are copied and pasted from another author’s book (with no apparent attribution), and, thus, made references to “DeLoach/Quayle.” I will be updating my book with this new info. And the new info is that I have been able to verify the following.
The first edition of “Genesis 6 Giants” sells online, with Amazon as an example, for $315.01-$468.70, so I was not about to purchase it.
I asked across my 9 or so social networking sites if anyone who had the book could look up certain things for me, but no one had it.
However, someone was kind enough to donate the funds to purchase the 2nd edition which is “Revised, Updated, and Expanded” and sells for $45.00. Thus, I cannot speak of the 1st ed. although a dissatisfied Amazon customer noted that the 2nd edition is simply the 1st ed. with a few bells and whistles.

Some of it comes in the form of 6 whole chapters that are merely copied and pasted from an excerpt of Edward J. Wood’s Giants and Dwarfs (available in e-format here).

You can click on any of the following images to enlarge them.

Yet, this is not the issue, since Wood’s book was published in 1868, is in the public domain, and is attributed by Quayle.

Stephen Quayle published the 1st ed in 2005. Charles DeLoach published his book Giants: A Reference Guide from History, the Bible, and Recorded Legend in 1995 through Scarecrow Press, which was eventually taken over by University Press of America and/or Rowman. Quayle’s website articles and the 2nd ed, published in 2015, contain extended sections from DeLoach’s book without attribution and are therefore plagiarized.

Now, Quayle quotes and otherwise references various authors and does refer to and footnote DeLoach. 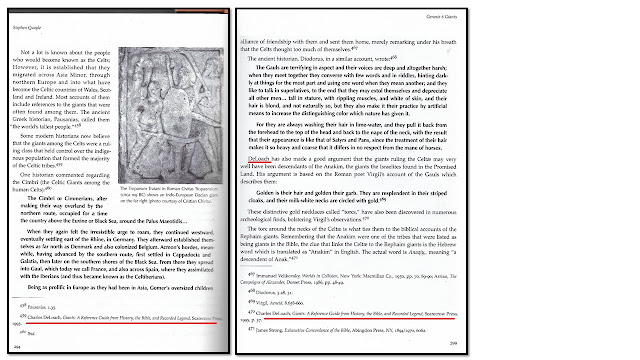 Yet, there is no indication that various chapters of Quayle’s book are copied and pasted from DeLoach’s.

There are times when Quayle’s copying and pasting fail him on a technical level, concerning the usage of technology: when he has it that “at the time of Israel’s invasion, the Anakim, Awim” while DeLoach has the transliteration correctly as “Avvim.”

A least on one occasion, Quayle took a footnote by DeLoach and inserted into the text: 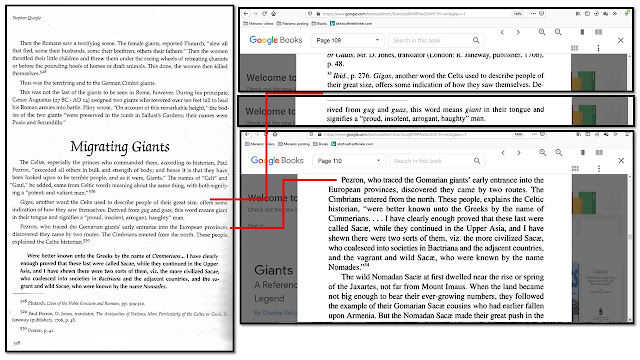 As you can see from the images, I do not have DeLoach’s book in hardcopy, only via Google books.

Google books are extended previews and do not display every single page, thus there are some sections I could not double check.
Moreover, that which follows are merely examples from entire chapters (plural).

Also note that for any statement I directly point to between the books, that which comes before it and that which follows, are also DeLoach’s words pasted into Quayle’s books, so there is much more than meets the eye.

Stephen Quayle’s book is on the left, DeLoach’s on the right. 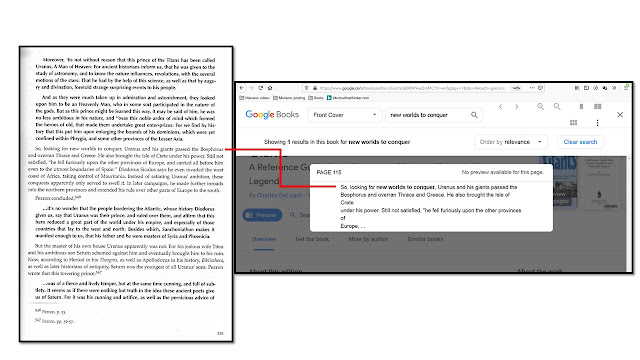 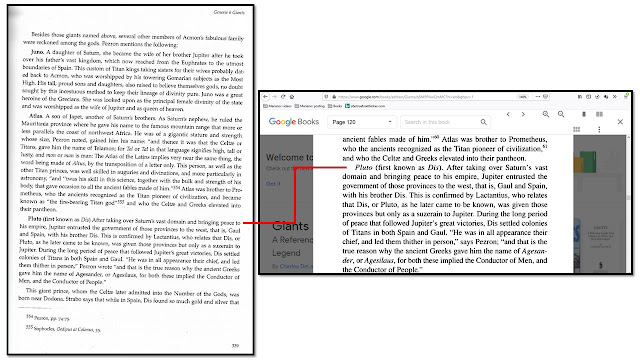 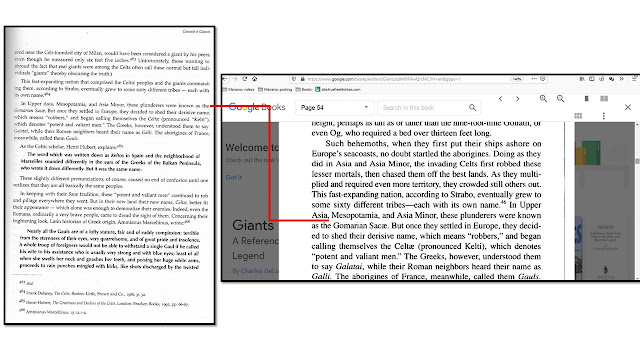 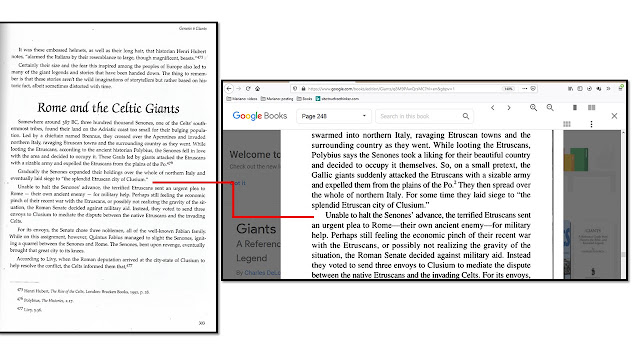 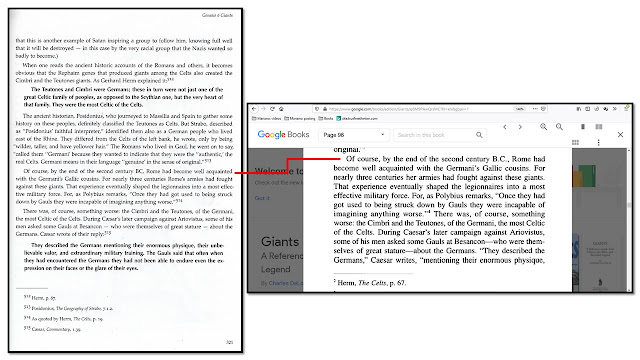 I pondered what some responses may be and thought to note a few:
The primary response, which would preferably come when people who own either version of Quayle’s book double check my claims, would be that people begin contacting him and asking him about it.

Some may claim that I am not following the New Testament principle of going to my brother first, then bringing someone with me, and then going to the church if the brother does not repent. Well, that is of primary use for a local church. As noted, I attempted the first step, attempted the second via contacting Prophecy Watchers, and have no idea how to attempt the third step since I do not know where Quayle attends services. Also, it is acceptable for me to attempt to confront him much as Paul did to Peter—with the exception that I know not where to do it face to face.

Perhaps some think I am making this public to, well, fill in the blank: I have envy, I have hatred, I have an inability to deal with Quayle’s fact-based views, etc. As noted before: Christians and authors are supposed to have integrity. My book and articles on my site contain the details of why the most problematic portions of Quayle’s book are the parts he himself (as far as I know) write since they contain many non-biblical claims.

Some may think I just want to sell my books. Well, of course authors want to sell their books (and I have also given many away) since a “worker is worth his wages” and I never met anyone who made such a complaint who worked for free at their own job.

Overall, any such objections would be to distract from the issue that the ball is in Stephen Quayle’s court—even if it is not to me to whom he must give account. If you are disturbed by this information, then please contact him and he may reply. In other words, do not shoot the messenger but attempt to take the New Testament steps and pray that Quayle will set things aright—for his own sake and the sake of those who rely on him for wisdom.