Continuing a consideration is Adam Schwartzbauer’s article The Truth About Giants. When all segments are posted, you will be able to find them here.

Schwartzbauer notes, “When most people think of giants, they think of them as being 10 to 12 feet tall at the most” while this denotes the utterly subjective nature of the term giants, he does not tell us how he knows what “most people” think.
He tell us “Giants have been excavated all over the world, and range from 7 feet tall, to the 2 largest giant skeletons ever found being 36 feet tall, found by the Carthaginians between 200 and 600 B.C. Also found were molars the size of your fist, and teeth that weigh several ounces each.”
There are many problems with such assertions. Firstly, 7 ft. is not particularly impressive now but would have been a few centuries ago in certain non-European countries. As for Carthaginians and the supposedly accurate record of alleged discoveries during a span of four centuries actually comes from a vague reference.

In chapter “Grading the Giant Human Skeleton Chart” of my book What Does the Bible Say About Giants and Nephilim? A Styled Giantology and Nephilology I wrote, “So the questions are: where are the skeletons? How do we know they are that tall (both of them the same)? How do we know who found them (Carthaginians)? How do we know when they found them—the date range ranges almost half a millennia: 200-600 BC. And how do we even know whether they were human?”
The last question also applies to “molars the size of your fist, and teeth that weigh several ounces each”: how do we know that they were not of dinosaurs or pachyderms or whales, etc.? Unless Carthaginians of 200-600 BC were expert anatomists then those are key questions.

Adam Schwartzbauer asserts “Some characteristics of the giants are that they had 6 fingers, 6 toes, and double rows of teeth. For them, these were normal, and not mutations” but he does not tell us how he knows their genetics specifically enough to assure us that “these were…not mutations.” Also, biblically extra digits is only stated about one single person—and he was a Repha (2 Samuel 21:20).

He claims, “It appears as if Hitler’s Aryan race was real: tall, blonde haired, blue eyed giants, which were possibly the Celtic giants.” But this only implies that the certain peoples of certain European countries are taller than average (with “average” being subjective).

Since he has been broad-brush painting with a watered down generic broom, Adam Schwartzbauer claims, “History is full of accounts of Nephilim; it seems historians have done their best to keep this fact hidden from the public.”
He then gets into issues such as explorers’ journals, Romans records, documented eyewitness sightings, that are uncritically accepted even if told centuries ago about a time and place no one is able to examine.
He also quotes Stephen Quayle, “large bones…are usually dismissed as being the bones of ‘mastodons’—a premise that’s hard to justify given the fact that the creatures are often buried in human graves wearing battle armor along with a shield and massive sword’ (Genesis 6 Giants, pages 190-191.).” Now, I am unsure that he is quoting Quayle because Quayle plagiarized entire chapters in that book, see here.
But perhaps he plagiarized accurate claims. Well, there is nothing specific in the quote so one would have to know whether Quayle or whomever he plagiarized offered any specifics so that we can track them down. Having done this sort of research for as long as I have, I am not impressed by vague assertions nor by subjective terms such as large bones or massive sword.

Adam Schwartzbauer then falls into the non sequitur fallacy of assuming there large things must have been built for and by large people and that those ignorant primitives could not have built megalithic structures.
Thus, he goes from the question “Could these gigantic ruins have been built by gigantic people?” to the all-encompassing answer, “It must have been gigantic beings who built it.”
He specifies, “Perhaps one of the best evidences of giants are the ruins of Baalbek, Lebanon” but it just so happens that I specifically focused on that in chapter “Was Baalbek Built by Giants?” of my book What Does the Bible Say About Giants and Nephilim? and, guess what, we have centuries old records about how it was built—by good ol’ fashioned humans.

Adam Schwartzbauer then references “occurrences of giants after the flood, some of these offspring were called Rephaim, after one Rapha…When Abraham and Sara passed through Canaan, the entire area was populated by the descendants of Raphaim, Anakim, and Nephilim. When David killed Goliath, remnants of these giants still lived in the land…It is likely that the Rapha, after whom the town was named, was either a post-flood Nephilim, or one of their descendants.”

In short, this is utterly lacking in evidence—he does not present any because there is none. This is also incoherent, note that he claims, “populated by the descendants of Raphaim, Anakim, and Nephilim” but, supposedly, Rephaim and Anakim are descendants of Nephilim—and also, Anakim are a Rephaim subgroup. 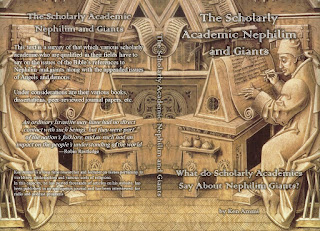