Arthur C. Clarke’s book Childhood’s End begins with an expanded version of the earlier short story Guardian Angel. One of Childhood’s End’s key features is that the aliens, the Overlords, are in appearance much like unbiblical but common depictions of the Devil—yet, ten-feet-tall—having “leathery wings, the little horns” as per Childhood’s End but all we know about their appearance in Guardian Angel is they have “A very famous and unexpectedly beautiful tail. A barbed tail.”

So in Childhood’s End when they finally reveal their form, “The most terrible of all legends had come to life, out of the unknown past.”
Yet, “In the Middle Ages, people [had] believed in the Devil and feared him. But this was the twenty-first century; could it be that, after all, there was such a thing as racial memory?” even though “the Overlords…could have given rise to the conventional portrait of the Devil.”

Matthew Graham, executive producer of the SyFy miniseries, stated, “It was clear from the get-go that Karellen look like the devil — not only the devil, but the devil that a child would draw in Sunday school.”
He notes that while Clarke’s book had Karellen having “little horns,” (Daniel 7?) they were designed oversized for the series, “We did look at designs with little horns, but they looked like a fawn or a satyr or a magical forest creature, and we really did want Karellen to look as imposing as possible. Little horns just looked like an apology for horns.”

The aliens do not show themselves physically to humanity until over half a century has passed from the time of their arrival on Earth. This is in order to lessen the shock by waiting until humanity has greatly benefitted from their actions and high tech and also until humanity has abandoned its traditional theologies.
Thus, another irony is that at one point in Guardian Angel someone asks about the aliens’ point of contact to Earth, named Karellen, “why the devil won’t he show himself?”

As Matthew Candelaria notes in his paper “The Overlord’s Burden: The Source of Sorrow in Childhood’s End,” the aliens appear in spacecraft that are 30 kilometers/18.64 miles wide “passing overhead like demon-driven clouds” which stationed themselves over major cities around the world in part as a defense mechanism since if they were destroyed they would fall upon major cities.

But the issue of, essentially, selling our soul for high tech is an ancient tale found, for examples, within the Book of Enoch/1 Enoch/Ethiopic Enoch and the tale of Prometheus Pyrphoros.

It is noted that, much like the Devil, the “Within those silent, unmoving ships, master psychologists were studying humanity’s reactions…Karellen himself must have been studying us· for centuries” and was “showing a complete and absolute mastery of human affairs.”

Within the stories the correlation between the aliens and common depictions of the Devil is not accidental.

The United Nations Secretary-General who is the only go between the aliens and Earthlings is named Ricky Stormgren states, “I always thought so! You have been seen by Man!” yet, Karellen replies, “I didn’t say that…Your world isn’t the only planet we’ve supervised.” Stormgren states, “There had been many legends suggesting that Earth has been visited in the past by other races.”
But it is not quite a case of ancient aliens but of a styled-reverse-common memory—the aforementioned “racial memory.”

Since humanity witnessed that these aliens brought about humanity’s demise then by this backwards moving racial memory humanity has had a mental image of such a form as being devilish.

The Bible’s Book of Revelation references the establishment of a one world government with a one world religion—this is actually exactly what many people who claim to be in contact with aliens claim that they want us to do.
In Childhood’s End, Karellen states, “You’ve often asked me about our long-term plans…The foundation of the World State is of course only the first step. You will live to see its completion but the change will be so imperceptible that few will notice it when it comes” which is termed a “Golden Age” and which is a styled soft-tyranny much like the proverbial frog in the heating pot:

The race was too intent upon savoring its new-found freedom to look beyond the pleasures of the present. Utopia was here at last: its novelty had not yet been assailed by the supreme enemy of all Utopias-boredom.

Moreover, the tale tells us “They know that we represent reason and science, and, however confident they may be in their beliefs, they fear that we will overthrow their gods…Humanity had lost its ancient gods: now it was old enough to have no need for new ones.”

There is an interesting statement that “It was all rather like one of those old Fritz Lang films” and his key film is the 1927 AD Metropolis which is about a totalitarian government and a scientist who is into the occult who downloads the contents of a woman’s brain and uploads them into a robot which then takes on human flesh and appears to be just like her—so that it is now an android.
Also, at one point someone speculates that the aliens may be “hiding the fact that they’ve got nothing to hide?…physically they’re human beings like us” and that this “isn’t really my idea…I got it from a story of [G.K.] Chesterton’s.”

Candelaria notes that in Childhood’s End “humanity’s latent psychic powers become manifest through its children” who are “separated from the rest of humanity by the Overlords.”
The alien Overlords have been “sent to Earth by an entity they call the Overmind to bring about this ‘Last Generation’ of humankind,” he tells us and he notes “The children do not seem to age, but their powers grow, and they eventually destroy all life on the planet, then the planet itself, to help them grow and join the Overmind. Humanity dead and the Earth destroyed, the Overlords leave the solar system.”
This is also Book of Revelation-like as large portions of the Earth are destroyed.

Candelaria refers to this eschaton as “the final apotheosis of humanity” which is to divert or modify into a culturally higher joining with the Overmind which has Eastern mysticism overtones. In fact, within the story such is the case as, eventually:

It was a completely secular age. Of the faiths that had existed before the coming of the Overlords, only a form of purified Buddhism—perhaps the most austere of all religions—still survived.
The creeds that had been based upon miracles and revelations had collapsed utterly. With the rise of education, they had already been slowly dissolving, but for a while the Overlords had taken no sides in the matter.
Though Karellen was often asked to express his views on religion, all that he would say was that a man’s beliefs were his own affair, so long as they did not interfere with the liberty of others. Perhaps the old faiths would have lingered for generations yet, had it not been for human curiosity. It was known that the Overlords had access to the past…

…it is through its children that humanity will achieve apotheosis. The children have access to psychic powers, and the awakening of these powers leads to the end of the old humanity and the birth of a new, collective entity whose nature is rather akin to that of the Star-Child at the end of 2001.

“2001” refers to “2001: a Space Odyssey,” the 1968 AD Clarke novel. Candelaria also correlates the tales thusly, “We must turn again to Clarke’s 2001: A Space Odyssey in order to understand fully the conclusion of Childhoods End. In both novels, humanity is raised to a transcendent state by nurturing aliens.”

As for access to the past, we are told of a device whereby:

Almost the whole of human history for the past five thousand years became accessible in an instant. Earlier than that the machine would not go, and there were baffling blanks all clown the ages. They might have had some natural cause, or they might be due to deliberate censorship by the Overlords.
Though it had always been obvious to any rational mind that all the world’s religious writings could not be true, the shock was nevertheless profound. Here was a revelation which no one could doubt or deny: here, seen by some unknown magic of Overlord science, were the true beginnings of all the world’s great faiths. Most of them were noble and inspiring—but that was not enough. Within a few days, all humankind’s multitudinous messiahs bad lost their divinity.
Beneath the fierce and passionless light of truth, faiths that had sustained millions for twice a thousand years vanished like morning dew. All the good and all the evil they had wrought were swept suddenly into the past, and could touch the minds of men no more. Humanity had lost its ancient gods: now it was old enough to have no need for new ones.
Though few realized it as yet, the fall of religion had been paralleled by a decline in science.

Eventually the children become such that Karellen states, “It is no longer safe for us to stay. They may ignore us still, but we cannot take the risk.”
In reality, it all began with children and ended with children since when Karellen first reveals his appearance to humanity he states, “There are some children by the foot of the gangway. I would like two of them to come up and meet me” so that they go to him, he picks them up and first reveals himself holding two children. This is much like the Satanic Temple’s depiction of Baphomet and a likely emulation of when Jesus stated, “Let little children come to me, and do not hinder them, for the kingdom of heaven belongs to such as these” (Matthew 19:14). 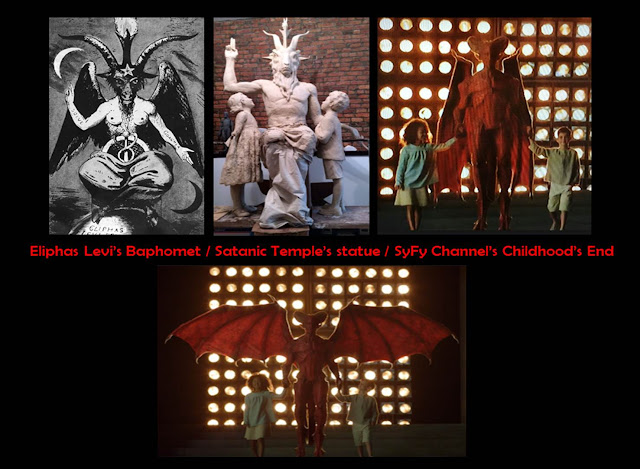 That Clarke was a self-confessed paedophile may be a reason that he so utterly dehumanized children.

We are also told of a “purely human” inventions which “had swept away the last remnants of the Puritan aberration” (I wonder what that might be) and these were “a completely reliable oral contraceptive” and “based on a very detailed analysis of t he blood of identifying the father of any child.”

Of the children, we are told:

…their faces…were emptier than the faces of the dead, for even a corpse has some record carved by time’s chisel upon its features, to speak when the lips themselves are dumb. There was no more emotion or feeling here than in the face of a snake or an insect. The Overlords themselves were more human than this.

The children “might have been savages, engaged in some complex ritual dance. They were naked and filthy, with matted hair obscuring their eyes.”

Lastly, on a symbolic note: a scene is depicted of the aliens’ home world wherein there is a museum which features artifacts from other worlds in turn such as a “single giant eye” circa a 100 meters/328.08 feet across.

Check out my book “Fifty Shades of Gray Aliens” for which I am making a money saving offer.