My new book “The Apocryphal Nephilim and Giants” is now available in paperback and Kindle ebook versions, be sure to see here first for my special offer to save you some money.

Subtitled “Encountering Nephilim, and Giants in Extra-Biblical Texts,” it is a follow-up to my books titled “What Does the Bible Say About Angels? A Styled Angelology” and “What Does the Bible Say About Giants and Nephilim? A Styled Giantology and Nephilology,” this text considers that which extra biblical text state about Angels, Nephilim and giants within a date range of circa the 3rd century BC to the 18th century AD.

Dead Sea Scroll Book of Giants and Reconstruction (100 BC)

Wisdom of Solomon aka Book of Wisdom (1st c. BC)

The Testaments of the Twelve Patriarchs (70-200 AD)

The Book of the Secrets of Enoch (late 1st c. AD)

Aristides the Philosopher (circa 125 AD) 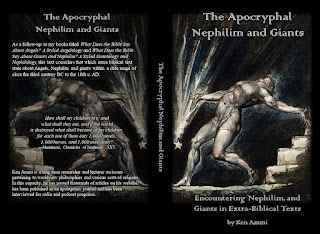 “How shall my children live, and what shall they eat,
and if the world is destroyed what shall become of
my children, for each one of them eats 1,000 camels,
1,000 horses, and 1,000 oxen daily?”
—Shemhazai, Chronicles of Jerahmeel: XXV