My new book “A Worldview Review of the Alien and Predator Mythos Franchises” is now available in paperback and Kindle ebook versions, be sure to see here first for my special offer to save you some money.

Herein is a thorough consideration of the real life worldviews of the many people behind the Alien, Predator and crossover mythos franchise and how this leads to the worldview promulgated within the mythos franchises themselves—where reality meets fiction.

Thirteen movies are reviewed in detail within.

Under consideration are themes of transhumanism, philosophy, theology, sexual ethics, alien threats and saviors, creation and destruction, and much, much more. 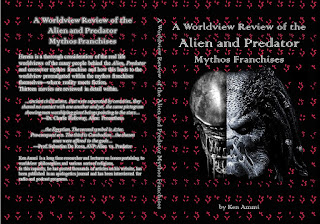 “…ancient civilizations, that were separated by
centuries, they shared no contact with one another
and yet, the same pictogram showing men
worshiping giant beings pointing to the stars…”
—Dr. Charlie Holloway, Alien: Prometheus

“…the Egyptian. The second symbol is Aztec.
Pre-conquest era. The third is Cambodian…
the chosen ones were offered to the gods…”
—Prof. Sebastian De Rosa, AVP: Alien vs. Predator