In view is the fifth chapter of a book or book to be or something that L.C. Geerts posted on the earth-history.com site that is titled or is to be titled, Earths Ancient History, a theory about ancient times and dawn of Mankind. I will focus on chapter, “Giants Nephilim and Anakim.” When all segments are posted, you will be able to find them here.

He notes something that I discern with be key “the reason why the Gods destroyed most living Creatures on Earth by a Great Flood” which was “a disaster carefully planned by the Gods” and yet, he is writing in the plural of “Gods.”
Fore more perspective on him, note that he is “sure that the Apocrypha and Pseudepigrapha books should be part of the ‘new’ Bible” since, as is implied, the Apocrypha (whereby L.C. Geerts also mean pseudepigrapha: texts written centuries after the Tanakh closed and millennia after the Torah was written) must contain the actual truth, or augmentations of the bits of truth in the Bible yet, one thing is certain: he would be in charge of determining the canon of the “‘new’ Bible.”
For example, he writes, “…the meaning of Genesis 6:3 is wrong translated or it’s a part of the text which not belong to this part of the story because in The Book of Jasher we can read…” so he is putting the very, very late dated pseudepigraphical cart before the original Torah’s horse.

L.C. Geerts specifies:
“After their descent to Earth, the Watchers indulged in earthly delights with their chosen ‘wives’, Through these unions were born Giant offspring named as Nephilim a Hebrew word meaning ‘those who have fallen’, which rendered in Greek translations as Gigantes, or ‘Giants.’”

I deeply appreciate that he qualifies that “Nephilim” is “rendered” rather than translated “in Greek” as “Gigantes.”
Now, he claims the result of the Genesis 6 affair was “Giant offspring” called “Nephilim” rendered as “Gigantes, or ‘Giants’” which still does not tell us what “Giants” means and if he thinks it has something to do with unusual height then, why is the “Hebrew word” “Nephilim” “meaning ‘those who have fallen’” but the “Greek translations” being “Gigantes, or ‘Giants’”? Well, gigantes merely means “earth-born” with no implication of anything to do with height—usual or unusual.

L.C. Geerts refers to a “mistake made by ‘The Church Fathers’ and the Jews, was that they forgot to erase the verses that contains stories of Gods, Angels and Watchers” but why does he think this? Because then “what is left over of Monotheism?” which cannot be a biblical theological question.
Firstly, “Angels” and “Watchers” mean the same thing, “Watchers” is just a Second Temple Era manner whereby to say “Angels,” a mere aka.
Secondly, Angels and Watchers are ontologically different from the one true Almighty God so that they are in an utterly different category—that of being created beings, beings created by one true Almighty God.
Thirdly, “Gods” are likewise in a different category as the term “God”—el, eloah, elohim, elohenu—is generic and well, we will get into this more as we progress.

L.C. Geerts then appeals to the unholy trinity of pop-researchers’ preferred texts, with a fourth thrown in, and these are Jubilees, Jasher, 1 Enoch/Ethiopic Enoch, and the KJV.

He writes:
“Genetic there was nearly no difference between Satana and his companions and the Daughters of Men this was also the same by ‘The Watchers’ (Children of Seth) and the Daughters of Men, otherwise they were unable to make children together. It is obvious that their Genetic structure was nearly the same because they were all ‘Angels’ and relatives at the beginning” (sic.).

Note the terminology: “Satana” and “his companions” who are “The Watchers” who are “Children of Seth” and “Daughters of Men” were genetically the same because “they were all ‘Angels.’”
Yes, he claims that Satana, Watchers, Sethites, daughters of men were all Angels—for some odd reason and whatever that means. I am granting that no, I will not be reviewing his entire book but regardless of who he arrived that this chaos of category errors the point is that it is a concoction of category errors.

Now, I will agree that Genesis 6’s sons of God are Angels and that Angels do share genetics with humans, we were made “a little lower” than they, which is evidence with that they can reproduce with us so that we are of the same “kind.”
However, if by Satana he is actually referring to Satan, the Devil, then he is excludes because he is not an Angel but is a Cherub (Ezekiel 14:28).

For more, see my various books on Nephilim related issues. 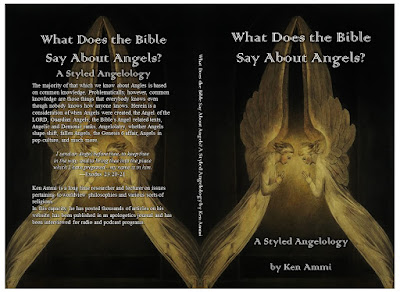