Islam considers both Muhammad and Jesus to have been prophets of Allah. This is an introduction to a ten part series which will consider their similarities and differences.

This essay is parsed thusly:

Some of the distinctions between Muhammad and Jesus are as follows: 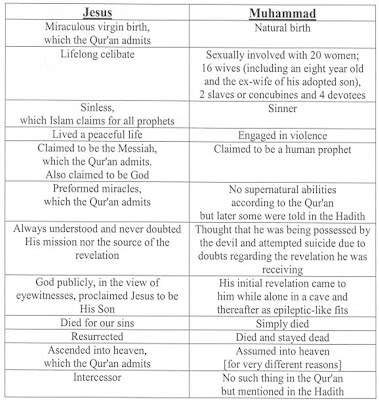 The segments to follow will consider some of these in detail.

Ravi Zacharias has interestingly and succinctly pointed out some of the distinctions:

“There is much more that can be said by way of contrast between the lives of Mohammed and Jesus.

Mohammed’s marriages to eleven wives have been a fascinating subject for Muslim scholars to explain. Whatever else a marriage does or does not prove, it clearly established the gradual need to die to one’s self so that the two can become one. It is a process of failing and picking up, never one of perfection.

But even if one were to grant all of the strained explanations for Mohammed’s practices, included in which is the embarrassing Koranic description of heaven as ‘wine and women’ (Surah 78:32ff, which Muslims dismiss as metaphorical), there is never even a hint in the life of Jesus that He was ever driven by sensuality or needed to seek forgiveness for anything.

Jesus alone emerges as the spotless One, untainted by any error of omission or commission. It should also be noted that this contrast is not only evident in the way Jesus and Mohammed lived, but also in the way they understood their call.

So different is this sense of origin and call that, by Islam’s own accounts, when Mohammed first claimed to have received revelations, he was confused and not sure what it meant. It was others who told him that this could be the voice of God speaking to him.

Jesus on the other hand, knew exactly who He was and from whence He came” (Ravi Zechariahs, Jesus Among Other Gods (Nashville: Word Publishing, A Thomas Nelson Co., 2000), p. 41).