Grunge posted a video titled, “The Untold Truth Of Fallen Angels” to which I posted the following comment.

This video is clearly mean, in part, to express prejudice. The basic point is “Here’s what Jews and Christians say but THEY ARE WRONG and we will not dare claim that any other religion is wrong—not one.”

You say “Fallen Angels don’t exist in Islam” but that is not the case, see “Islam’s magickian fallen angels Harut and Marut.”

You say “theologians turned themselves into pretzels trying to explain how Satan exists in the first place…Satan must have been good at one point” along with a mere untied loose-end with the “Clearly, these scholars went to the Princess Bride school of logic and reasoning” yet, this is biblical since in Ezekiel 28 we see that the anointed Cherub was loyal to God, was then in the Garden, then fell, etc.

Of course, that ancient mosaic is biblically inaccurate since biblically Angles do not have wings (nor halos)—wing began to be added by artists in order to help the viewer denote which were the Angels in any given illustrative depiction.

That “Lucifer fell because his love was a selfish love of power” seems right but that “the other angels who fell did so because they loved Lucifer” does not: they fell, as per Genesis 6, due to their love of human women.

Hey, here’s an idea since you somehow managed to virtue signal about LBGT: why don’t you mention how in some Muslim countries, LGBT personages are thrown off of buildings? You would not dare, obviously.

Fallen Angels are not in “hell” they are in Tartarus aka the Abyss/bottomless pit and will only eventually be in what you call “hell.” You are also mistaken on that fallen Angels “aren’t exactly at the mercy of the demons there, because they’re kind of are those demons, right?” Wrong, in a roundabout way, demons are fallen Angles.

But I agree that Ethiopic Enoch aka 1 Enoch contradicts the Bible.

Please get some fact checking done before you post videos.

FYI: I have written many books on Angels, demons, Nephilim, Satan, etc., including “The Paranormal in Early Jewish and Christian Commentaries: Over a Millennia’s Worth of Comments on Angels, Cherubim, Seraphim, Satan, the Devil, Demons, the Serpent and the Dragon.” 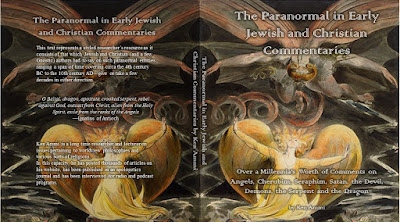