Graeme Codrington’s website describes him as “a futurist [aka Transhumanist], author and expert on the future of work. He speaks to organisations and their leaders about the forces shaping the world and how we should respond.”

Graeme Codrington’s website describes him as “a futurist [aka Transhumanist], author and expert on the future of work. He speaks to organisations and their leaders about the forces shaping the world and how we should respond.”
Seeking to shape the world may be why he decided to engage Christian theologian and Bible teacher Dr. James White in a debate titled, Does the Bible restrict marriage to a man and a woman?: I likely would not have agreed on the titled since it appears bombastically biased since “restrict” is, like, triggering and stuff—at least to our neo-pop-culture-de jour.

On his Facebook page, Graeme Codrington posted the following (August 21, 2019 AD)—as usual, since his page is not open to “fan pages” then I cannot post a comment on it so if you are willing, please post a link to this article therein.

He states that “conservative Christians have told me that ‘you cannot argue your case (for gay marriage) from silence’. In other words, if the Bible doesn’t say ‘gays can get married’ then they can’t.”
He counter argues that “the Bible doesn’t say you can have a heart transplant, give blood, drive a car, eat broccoli, use credit cards or vote in democratic elections.”

But Graeme Codrington is willing grant it, for the sake of argument, “for the sake of discussion, let’s play this game their way. Since Jesus is the centre of the Christian faith, and we look to Him and His example and teachings, surely I can use this exact same argument back at them: Where in the Bible does Jesus ever speak against homosexuality? And where does any Biblical author ever prohibit gay marriage?…Give it a go. Point to the verses in the Bible I must have missed…”

There are, at least, two problems. Codrington rightly took those Christians as focusing on “the Bible” but he focuses on “Jesus,” specifically.

That is a fundamental error because Christianity is not, I repeat: is not, based on what Jesus said or did not say but upon the full council of God: the whole Bible.

For the sake of discussion, let’s play his game his way—where in the Bible does Jesus ever speak against homosexuality? And where does any Biblical author ever prohibit gay marriage?

Clearly, the latter option is the accurate, logical, rational, factual, one that actually reflects the basics of reading comprehension 101.

Note that Graeme Codrington admits that “the most you can say is that the Bible is against same gender sexual activity” and continues with “But anyone who thinks that ‘being married’ and ‘having sex’ are the same thing clearly have never been married, and have done no theological or critical thinking on the matter. That would be reductionist in the extreme.”

He then moves the goalpost from same gender personages (homosexuals) getting married to “show me the verse in the Bible that says LGBTQI people can’t get married” and, by the way, “show me where Jesus ever spoke out against an LGBTQI person.”
But this is a whole other, and much more complex, game since the L, G and Q (lesbian, gay and queer) are categorized as same gender personages, the B (bisexual), the T (transsexual/transgendered) and the I (intersexed) implies (in the case of the former) and may imply (in the case of the other two) same and/or different gender personages.

I am going to set aside the various emotive things he stated based on caricatures of various sorts of Christians, except to note that, for example, he complains about “Hypocrites. Intellectually dishonest. Self righteous. Proud.”
But he began with a conclusion since he provided no premise upon which to condemn “Hypocrites. Intellectually dishonest. Self righteous. Proud” so he is merely emoting.

Now, keeping my vegetable metaphor, let us pile these up.
Where in the Bible does Jesus ever speak against homosexuality?
And where does any Biblical author ever prohibit gay marriage?
Show me the verse in the Bible that says LGBTQI people can’t get married.
Show me where Jesus ever spoke out against an LGBTQI person.

While the Bible speaks against (invalid) alternatives to heterosexual marriage more than it speaks against murder, we can reply to all four with one single verse.

When Jesus is asked about marriage (within the context of the Levirate system), He replied:

Have you not read that He who made them at the beginning “made them male and female,” and said, “For this reason a man shall leave his father and mother and be joined to his wife, and the two shall become one flesh”?
So then, they are no longer two but one flesh.
Therefore what God has joined together, let not man separate (see Matthew 19:3-6 also see Mark 10:2-9).

Indeed, this strikes at various segments of society as it touches upon various issues:
1) Marriage is to be between a male (singular) and a female (singular).

2) They are not to shack up before marriage as “For this reason a man shall leave his father and mother” only when he is to be “joined to his wife.”

3) Sexual relationships are only to occur after marriage as it is when a man is “joined to his wife” that “the two shall become one flesh.”

4) Adultery is condemnable as it violates the premise, the template of marriage as per 1) and also as per 3).

5) Lastly, divorce is condemned as “what God has joined together, let not man separate.”

Thus, Jesus not only addressed same sex marriage by excluding it but addressed unmarried shacking up, unmarried sex, adultery and divorce.

Now, think of just how many people could care less about what Jesus had to say and ask yourself whether that is the case because Jesus made no sense or because accepting His authority on the matter just might be inconvenient to them.

So there you have it Graeme Codrington, a reply to all four of your questions in one.

For some related info, see my books (on which I am offering a money saving deal):
The Occult Roots of Postgenderism: And a History of Changes to Psychiatry and Psychology
In Consideration of Rev. Dr. Mel White on Christian Homosexuality 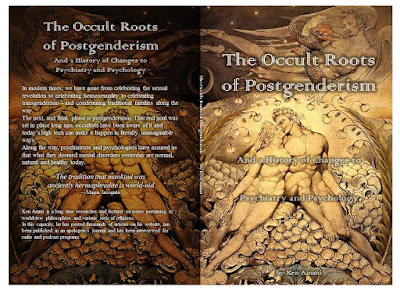