Let us begin with that this newly reported skull was actually found in 1933 along the Long (Dragon) jiang (river) in China but, “Three years ago, a Chinese farmer made an unusual donation to a university museum.”

The skull is known as Homo longi, the Harbin cranium, and Dragon Man. But the post-flood Nephilim pop-researchers should not start with their typical neo-theo-sci-fi since no, it is not a hybrid dragon man but is referred to as dragon due to the river’s name.

The pop-researchers may, however (based on their un-evidenced assertion that Nephilim were giants) claim victory since the skull is described as follows—gleaning from multiple reports:

It is also described as an “elongated cranium” so that will perk up LA Marzulli’s ears since he asserts that Nephilim were giants, asserts that he has their skulls, but only ever shows us regular sized skulls.

The actual fossil is “a nearly complete fossil skull,” this, at least, is how the skull is depicted:

Thus, well within good ol’ fashioned human average—even if bigger than the monkeys and apes that evolutionists demand are our ancestors or otherwise relatives.

Reference to the brain is not, of course, that it was found fossilized but due to estimations of that which the skull could contain.

This is even though one report has it that the “brain was about 7 percent larger than the average brain of a living human.”

And note the nature of such reporting since the same report that told us of a “massive skull” followed directly with that “had a brain comparable in size to that of modern humans.”

Lastly, we are told of “the likely size of this ancient human” and that he was “very large and powerful” with very and large being subjective, of course.

Here is an artist’s reconstruction—note the perspective of the depiction that makes it appear very, very tall (and yes, from a skull they claim to know the skin color, hair length and style, what he wore, etc., etc., etc.): 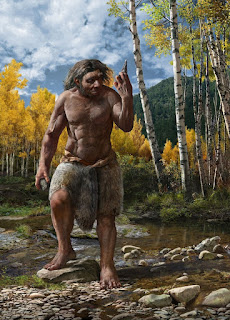 Yo, when’s the Dragon Man’s workout

and macros gonna be published

For the neo-theo-sci-fi to which I referred, see my book Nephilim and Giants: Believe It or Not! Ancient and Neo-Theo-Sci-Fi Tall Tales