The following are some stunted discussions, meaning not very long since the Atheists were unwilling to keep engaging.

One was due to a video titled “Let’s Talk About the Definition of Atheism For a Moment (Dr. Chris Gadsden)” wherein Śmiem Wątpić commented:
The sentence “I don’t believe any god’s exist” or “I disbelieve that any god’s exist” does not imply that the person also thinks, that the proposition “God exists” is false.

The following are some stunted discussions, meaning not very long since the Atheists were unwilling to keep engaging.

I, Ken Ammi, replied:
I see what you mean: God exists but you could still not believe that God exists.

Rusty Walker chimed in with:
Thew converse being, God doesn’t exist, and you still insist that he does.

Ken Ammi:
But according to you that means that an accidentally existing ape believes that God exists when He does not so what would your point be? Now, since you just positively affirmed “God doesn’t exist” you must now prove it.

Rusty Walker:
For God’s sake Ken, I described the converse. I didn’t say whether it was true.

Rusty Walker:
In my worldview, I am only mistaken if your original proposition is correct, which no theist has ever demonstrated to my satisfaction.
For someone to say “X exists,” I would at least expect tangible and non-arbitrary evidence that leads to the conclusion that is a result of X, and only X. Theists have never been able to do that.
What happens instead is that theists make the bald assertion that X is responsible for Y, but the evidence presented is arbitrary and does not tie directly to Y.
“X created the universe” is an assertion where nothing evidential ties X to the creation of the universe, and an arbitrary logical argument is provided in its place.

Ken Ammi:
I am so very glad you put it that way since it proves my point: you have no premise for truth, logic or ethics, for holding to these and for demanding that others do likewise which is why you refer to that which has not been “demonstrated to my satisfaction” as if your subjective satisfaction is any sort of standard. Indeed, yours is a purely subjective personal preference based endeavor which is actually based on beginning with conclusions—which you actually beg, borrow, and steal form my worldview.
Likewise, you write of that which you “at least expect” to which, at this point (since you have yet to take step number one) I would say that your expectations are not a standard nor an imperative but a mere personal preference.
You also refer to “tangible and non-arbitrary evidence” but do not bother elucidating what that would look like, what would count as such, etc.
Friend, please understand that I am not your Atheist buddies who are satisfied with vague one liners.
So at this point, even if it is that actual case that “theists make the bald assertion that X is responsible for Y” the reply to which is: so what?
The utter absurdity of your missionary endeavor is that you are critiquing what you believe to be accidentally existing apes/ape relatives for not meeting your pseudo-standards.
Worse still, if you are right about us being accidentally existing apes/ape relatives then there is no imperative to adhere to truth, logic, or ethics so that is all that really matters is survival (for some unknown and accidental reason) then such accidentally existing apes/ape relatives can live in utter delusion and it matters not—it is merely a Darwinian survival mechanism.

And that ended it so, we move on to a video titled “Time To Teach: Atheists School Is In Session!” to which I commented thusly:
Here is part of the lesson: Ammi’s law states that Atheists will begin with conclusions 100% of the time.

Ken Ammi:
Good question: this one is not.

Danny Spits:
Then I say that is pure projection?

Ken Ammi:
Are you an Atheist?

Danny Spits:
I have never believed in a go or gods

Ken Ammi:
Well, that is questionable on a few levels including that two of Atheism’s consoling delusions if lack of ultimate accountability and absolute autonomy thus, your god in the guy you see in your mirror. So of which denomination of Atheism are you?

That was that.
A video titled “Transhumanism in Light of the Bible Documentary” had ZombieRyushu making a very emotive comment which was:
I’m a person with disabilities from birth. I have no interest in religion. I don’t believe there are any such things as gods. I hope I live long enough such that if I become terminally ill, I can transplant my brain, or mind into a Cybernetic body, and live the life I couldn’t this time, and this era and have experiences denied to me as an adult in this lifetime. Perhaps spend centuries doing that and exploring the universe, not indulging in this man’s fantasy.

Ken Ammi:
I am empathetic, friend. Now, you say “I have no interest in religion” but are commenting on a religiously based video and you “don’t believe there are any such things as gods” since they are “man’s fantasy” but how do you know that?

ZombieRyushu:
At our current level of technology, we have enough information about the universe to disprove any of the existence of any existing religious god. (So, we know the Bible is a collection of books written by Humans, and that if there is a creator of the universe, we have no knowledge of that entity. It may be impossible for us to ever find out.

Ken Ammi:
Friend, you are beginning with conclusions, are jumping to them so: how does your worldview provide you 1) a premise for truth, logic or ethics, 2) for holding to these and 3) for demanding that others do likewise?
As to “we have enough information about the universe to disprove any of the existence of any existing religious god” is incoherent on a few levels: it is a fundamental miscomprehension of science and of God.
Science is a tool (the scientific method being established upon biblical theology) for exploring the universe, the material, physical realm of which God is not a part thus, your view of science has nothing to say about a being who is non-material/physical and does not exist within the universe.
I am unsure why you note that “the Bible is a collection of books written by Humans” since no one claims otherwise.
You then speak for all of humanity by stating “if there is a creator of the universe, we have no knowledge of that entity” but I am unsure whence you got such knowledge and authority. In fact, millions upon millions of humans have claimed to have had experiences with God.

But that was the end of that one.

Ken Ammi:
Since you began with a conclusion since your comments are based on hidden assumptions which is why you began with conclusions so let us take a step back: how does your worldview provide you 1) a premise for truth, logic or ethics, 2) for holding to these and 3) for demanding that others do likewise?
Now, if you think “atheism isn’t a world view” then you disagree with Dawkins.
So are you saying that in all of your thinking about anything and everything you “don’t believe in God” in any area of your thinking?

Ken Ammi:
So, since you admit that your worldview does not provide you 1) a premise for truth, logic or ethics, 2) for holding to these and 3) for demanding that others do likewise then, your comments are literally meaningless—they are no the level of a “My dear diary” entry or you arguing that chocolate ice cream is the best and vanilla is wrong.
So, since you disagree with Dawkins is either of you actually right or wrong—keep in mind you have no premise for even truth itself.
Ironically, you admit you have no premise for logic not for adhering to it but then you co-opt logic to write your sum-up. Thus, you discredited yourself and proved Ammi’s Law which is that Atheists will begin with conclusions 100% of the time.

Yet, that was the end of this one.

Reasons for Being an Atheist: A Comprehensive Guide

From Zeitgeist to Poltergeist: A Consideration of Richard Dawkins’ Polemics Regarding Christianity, Atheism, Communism, Nazism and Evolution

The Wild and Wacky World of Atheist Bus Ads and Billboard

The Golden Golem Goal: From Organism to Transhumanism—On the Tangled Web of Occult Mystical Alchemy and High Tech Transhumanist Chemistry 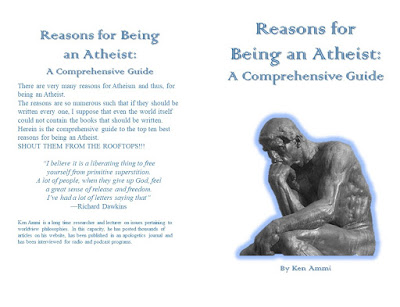