In view is Derek Gilbert’s article Last Clash of the Titans” Angels and Nephilim Part 9: Lest They Rise and Possess the Earth which I wanted to write some notes about since it features an admixture of details that can easily lead to the building of huge doctrines.

My books that are relevant to this issue, on which I am offering a deal, are:

In view is Derek Gilbert’s article Last Clash of the Titans” Angels and Nephilim Part 9: Lest They Rise and Possess the Earth which I wanted to write some notes about since it features an admixture of details that can easily lead to the building of huge doctrines.

My books that are relevant to this issue, on which I am offering a deal, are:
“On the Genesis 6 Affair’s Sons of God: Angels or Not?” subtitle “A survey of early Jewish and Christian commentaries including noted on giants and the Nephilim”
“What Does the Bible Say About Angels? A Styled Angelology”
“What Does the Bible Say About Demons? A Styled Demonology”
“The Paranormal in Early Jewish and Christian Commentaries” which is subtitled “Over a Millennia’s Worth of Comments on Angels, Cherubim, Seraphim, Satan, the Devil, Demons, the Serpent and the Dragon.”

Gilbert refers to “a new spin on the verse—and on the whole chapter, for that matter!” referring to an Isaiah text wherein “Key intelligence about our enemy in the supernatural war has been hiding behind the English translation of your Bible.”
Granted, I am not against getting behind the English and perhaps even offering a new spin but such premises are to be taken with a grain of Dead Sea salt because they can be the stuff of eisegesis.

He quotes Isaiah 14:20b–21, ESV, “May the offspring of evildoers nevermore be named! Prepare slaughter for his sons because of the guilt of their fathers, lest they rise and possess the earth, and fill the face of the world with cities.”
Gilbert asks, “What’s so bad about cities?”

Derek Gilbert tells us that Michael Heiser “has speculated…a more intriguing reading of the end of Isaiah 14” because “The Hebrew word for ‘city’ is `iyr. In Aramaic, the very same word means ‘Watcher’” so that the verse ends with “lest they rise and possess the earth, and fill the face of the world with Watchers.”
Thus, this has been turned into “God’s judgment against the offspring of the rebel angels on Hermon, the Watchers, and their progeny, the Nephilim.” 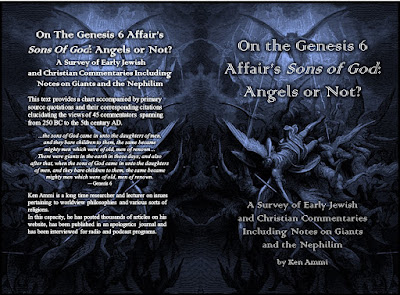 Let us pause to note that this denotes appropriating a text, or a single word in this case, towards ones eisegetical ends. Watchers is an apocryphal/pseudepigraphical term for that which Genesis 6 refers to as “sons of God” which are Angels.

But that is not all as Gilbert claims that “the only place in Isaiah where a Watchers-for-cities swap makes sense” but appeals to Isaiah 33:7-9 wherein, “heroes” is “’er’el” which “Elsewhere in the Bible” read as in a different context, is “transliterated into English as ‘Ariel,’ which means ‘lion of God.’”
This refers to Isaiah’s statement, “Behold, their heroes cry in the streets; the envoys of peace weep bitterly.”

Gilbert then tells us that “Jewish tradition was that the Arielites were angels” and while he identifies this as an “unbiblical notions,” he still runs with it, “The ‘ariels’ in verse 7 are paralleled by ‘envoys,’ which in Hebrew are malakim, a word that means ‘messengers’” which, within certain contexts, refers to Angels.

Well, the context is even simpler to discern than the previous text as it reads, “Behold, their heroes cry in the streets; the envoys of peace weep bitterly. The highways lie waste; the traveler ceases. Covenants are broken; cities are despised; there is no regard for man. The land mourns and languishes; Lebanon is confounded and withers away; Sharon is like a desert, and Bashan and Carmel shake off their leaves.”
Note the key terms: “in the streets” of the cities, “the envoys” to the cities, “The highways” to the cities which “the traveler” took so that “cities are despised” and “The land” on which the cities are built such as the citied countries Lebanon, Sharon, Bashan, and Carmel.
None of this has to do with Watchers/Angles but just with boring ol’ cities.

But we get another look at the alleged identification of ‘er’el as Watchers/Angles within a “puzzling reference to one of the exploits of David’s mighty men” according to which we are told that Benaiah, “struck down two ariels of Moab. He also went down and struck down a lion in a pit on a day when snow had fallen” as per the ESV. Derek Gilbert asks us to “Compare that to the King James translation” which states that he “slew two lionlike men of Moab: he went down also and slew a lion in the midst of a pit.”

We are then asked, “Were the lionlike men of Moab like the descendants of the giants (yâlîyd rapha, ‘sons of the Rephaim’) encountered by David during his wars with the Philistines?” Before dealing with the natural reaction to that question proceeding forth from left field, for they whom David encountered he cites “1 Chronicles 16,” so feel free to read the whole chapter and “2 Samuel 21:16, 18, 20, 22” which reads:
“16. And Ishbibenob, which was of the sons of the giant, the weight of whose spear weighed three hundred shekels of brass in weight, he being girded with a new sword, thought to have slain David…18 And it came to pass after this, that there was again a battle with the Philistines at Gob: then Sibbechai the Hushathite slew Saph, which was of the sons of the giant…20 And there was yet a battle in Gath, where was a man of great stature, that had on every hand six fingers, and on every foot six toes, four and twenty in number; and he also was born to the giant…22 These four were born to the giant in Gath, and fell by the hand of David, and by the hand of his servants.”
Well, this all refers to Goliath’s family and, sadly, Gilbert is employing the term “giants” and parenthetically informing us that this word, within this context, refer to “sons of the Rephaim.” Such is one of the problems of using the English word “giant”: it is a generic word that merely means taller than averate (Hebrew males averaged 5.5 ft. back then) and it is used to translate more than one Hebrew word (such as Nephilim).

He then asks, “were the ariels, like the Nephilim, human-angel hybrids? The Bible doesn’t tell us, so we can’t know for sure” but why let that get in the way of a good ol’ claim? Now, I do not mean to come across as dismissively harsh but such is the manner of argument that has become much too common with the top pop-researchers involved in issues relating to Nephilim, “giants” (whatever that means), Watchers, etc.
We are basically told that you cannot rely on the very many English Bible, if you consider the root of a word and how it is used in another context, add to this how folklore viewed it a few millennia ago, and bada-bing: you got yourself a ministry!

Before, the ariels were Watchers/Angels and now they might be “like the Nephilim, human-angel hybrids.” The issue with such argumentation is that one can simply claim whatever is convenient at any given time.

Back to the text, Gilbert tells us that “the context of Isaiah 33 suggests that the ariels, the ‘heroes’ of verse 7, were more than human” how and why, you ask? Because of the “pairing with the malakim of peace” but you would only think that malakim means Watcher/Angels here if you presupposed it, and also due to “the references to “Carmel, a mountain known as a holy site” which you would only think has anything to do with being “more than human” Watcher/Angels if you were stacking one assertion upon another.

And so, Gilbert offer “Isaiah 33:8, ESV, modified” (emphasis added for emphasis) and I will add that he modified it because no one can titillate the Nephilim, “giants,” Watchers, funny bone with boring ol’ cities—and I am stating this as someone who has written a tremendous amount of material about Nephilim, “giants,” and Watchers, as you saw from the books recommended above.

In any event, the modified translation is “The highways lie waste; the traveler ceases. Covenants are broken; Watchers are despised; there is no regard for man.” Yet, even this has not been modified enough since the context is still that of highways and traveler who would have used them to travel to what? Boring ol’ cities.

At least Gilbert admits that “some of this is speculative.

In any case, moving on to Genesis 3, he tells us that “The interesting bit here…is the dust eating” because “snakes don’t eat dust.” He tells us that “God may have been speaking metaphorically” and I will add that this is because they do not eat dust and also because that is just too boring.

So what is all of this stuff about eating dust? Well, I would not say “God may have been speaking metaphorically” but rather, that “God most certainly was speaking metaphorically.”
It should come as no surprise that the Bible interprets itself. Eating dust way back when Adam and Eve were the only two living humans still means the same as when the band Queen sang, “Another one bites the dust” it refers to being humbled and/or, in extreme cases, dying.

I go into this in details within my book What Does the Bible Say About the Devil Satan? A Styled Satanology but a couple of relevant references are:
Isaiah 65 “The wolf and the lamb shall feed together, and the lion shall eat straw like the bullock: and dust shall be the serpent’s meat. They shall not hurt nor destroy in all my holy mountain, saith the Lord.”
Psalm 72 “They that dwell in the wilderness shall bow before him; and his enemies shall lick the dust.”
Micah 7 “They shall lick the dust like a serpent, they shall move out of their holes like worms of the earth: they shall be afraid of the LORD our God, and shall fear because of thee.”

So overall, I hope the lesson has been that keeping texts within immediate context is better than playing around with root words so as to build fanciful claims.