Richard Dawkins, being a masterful biologist, zoologist and the recently retired Charles Symoni Professor for the Public Understanding of Atheism, seems just the right person for the job of critiquing a book on Creationism. He has indeed taken up the task.

Richard Dawkins wrote an elucidating critique of Atlas of Creation by the Muslim creationist Harun Yahya which is entitled “Venomous Snakes, Slippery Eels and Harun Yahya.”

Richard Dawkins, being a masterful biologist, zoologist and the recently retired Charles Symoni Professor for the Public Understanding of Atheism, seems just the right person for the job of critiquing a book on Creationism. He has indeed taken up the task.

Richard Dawkins wrote an elucidating critique of Atlas of Creation by the Muslim creationist Harun Yahya which is entitled “Venomous Snakes, Slippery Eels and Harun Yahya.”

…where the money came from…expensive and glossy production values of this book…And where does the money come from.

How this relates to science, biology, the Darwinian theory of evolution or creationism is lost upon me.

Richard Dawkins also did something that I find stunningly immature, unprofessional and even dangerous; he provided Harun Yahya real name.
How this relates to science, biology, the Darwinian theory of evolution or creationism is lost upon me.

The scholarly biologist-zoologist-professor also committed an ad hominem by noting that, or claiming that, Harun Yahya,

…was sentenced in a Turkish court to a three-year prison sentence “for creating an illegal organization for personal gain.”

How this relates to science, biology, the Darwinian theory of evolution or creationism is lost upon me.

Richard Dawkins, and you will recall that he is a biologist, zoologist and professor, first written critique of Atlas of Creation actually managed to get around to the book’s actual content. He notes that the book consists of “more than 700 high-gloss colour pages.”

At the time of the writing of his critique the imminently scholarly biologist, zoologist and professor noted ONE error on “almost the first page I looked at” and then admits that “I have not scanned the book for other inaccuracies of this kind.”

One mistake in more than 700 pages! No joking! Maybe there is something to this book. By the way, I do not know this book nor much about its contents and am thus not endorsing it but discrediting Richard Dawkins for doing such a Pre-Atheist-Kindergarten level job of critiquing it.

But wait there is more the erudite Richard Dawkins, equipped as he is as a biologist, zoologist and professor wrote a “Postscript” where he really exposed Atlas of Creation‘s dirty laundry or what he terms “this preposterous book.” By the time of the postscript he states, “I have now looked at some more pages” which makes one wonder what “some” means.

Well, this time the gloves are off and the biologist, zoologist and professor exposed TWO errors (a count of one being given to “The double page spreads” which deal with the same subject).

Yet, ever the clever pseudo-skeptic Richard Dawkins points out a THIRD error this time by putting his head together with the biologist and professor PZ Myers who managed to point out ONE error.

Let us see if we can count the cost: it took two professors of biology two articles to find FOUR errors in more than 700 pages! Note that in referring to errors I am granting Richard Dawkins and PZ Myers’ statements-foolish I know but I am feeling generous.

Having expended the full capabilities of two professors of biology Richard Dawkins ends his exhaustive critique by referencing the “‘breathtaking inanity’ of the content” of the Atlas of Creation (FYI: he does not bother accrediting the quote “breathtaking inanity” perhaps it was a PZ Myers-ism) and asks a question that is about as deep as he is apparently capable of getting,

Is it really inanity, or is it just plain laziness – or perhaps cynical awareness of the ignorance and stupidity of the target audience – mostly Muslim creationists.

WOW! Now this is news! This may be the very first time that Richard Dawkins has gathered up the courage to specifically critique anything Islamic-albeit he is referencing Muslim “creationists” and doing so from the comfort and safety of countries established on Judeo-Christian principles.

As for Atlas of Creation; the score to date is:

Although, in reality the Atlas of Creation consist of three volumes totaling 2300 pages thus, Harun Yahya’s score is circa 2296. 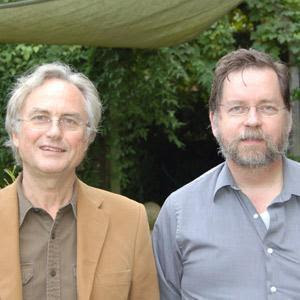 Let me guess: as with just about everything else the Dawkinsian apologists will claim that, as with just about everything else, it is simply too far beneath Richard Dawkins to bother with such creationist nonsense. Thus, here again Richard Dawkins failed to fulfill his duties as Professor for the Public Understanding of Science. No wonder that Philip Johnson had to virtually beg him to do his job and even had to recommend how to do it:

I have come to the conclusion that Richard has never assumed the duties of a Professor of the Public Understanding of Science…He seems to lack the intellectual confidence to say anything of substance, so he sticks to the very safe path of appealing to materialist prejudices. I communicated this judgment to Richard, suggesting that he might consider taking on a more challenging subject…

The response that Philip Johnson received from Richard Dawkins was basically, “I take it the difficult target you have in mind is yourself…” a question about the age of the Earth and whether “human ancestry and lobster ancestry…meet in a single common ancestor?”

I responded that I did not have only the intelligent design movement in mind as a suitable difficult target. For example, I had suggested to Richard that he write about the British government’s policy of mass slaughter of animals in the vicinity of any case of hoof and mouth disease…This would be a particularly appropriate topic for a Darwinian to use to educate the public about how scientific decisions are made, but Richard would not take it up. Too bad…[fn] Philip Johnson’s Weekly Wedge Update, “Richard Dawkins,” Access Research Network, July 9, 2001
[/fn]

Dawkins, who on his web site described the picture of an insect in the Atlas of Creation that was actually a model as an error and thus attempts to cover up the powerful global impact of the Atlas, and imagines that this somehow represents a great discovery…

Note that on his web site Richard Dawkins never goes into the question of whether or not the caddis fly is still alive today, makes no comment at all about the subject, and is only interested in the nature of the picture in the Atlas of Creation. Dawkins naturally has not a word to say about the fact the creature is still living today and has never changed over the course of millions of years.

Neither does Dawkins have anything to say about the hundreds of living fossils shown on just about every page of the Atlas of Creation.[fn] Harun Yahya, “Richard Dawkins’ And Daily Hurriyet’s Ignorance,” Harun Yahya An Invitation to the Truth[/fn]