Much wonderment has been focused upon the statements from Vatican representatives as to the existence and nature of extra-terrestrials / aliens.

The statement were part logical, part theological, part weird, part flummoxing and all in need of discerning.

The Rev. Jose Gabriel Funes, the Jesuit director of the Vatican Observatory, was quoted as saying the vastness of the universe means it is possible there could be other forms of life outside Earth, even intelligent ones. “How can we rule out that life may have developed elsewhere?” Funes said. “Just as we consider earthly creatures as ‘a brother’ and ‘sister,’ why should we not talk about an ‘extraterrestrial brother’? It would still be part of creation.”[1]

If aliens exist, they may be a different life form that does not need Christ’s redemption, the Vatican’s chief astronomer said. Jesuit Father Jose Funes, director of the Vatican Observatory [named to his position by Pope Benedict XVI], said Christians should consider alien life as an “extraterrestrial brother” and a part of God’s creation…

These potential forms of life could include those that have no need of oxygen or hydrogen, he said. Just as God created multiple forms of life on earth, he said, there may be diverse forms throughout the universe…

Asked about implications that the discovery of alien life might pose for Christian redemption, Father Funes [stated] “We who belong to the human race could really be that lost sheep, the sinners who need a pastor…God became man in Jesus in order to save us. So if there are also other intelligent beings, it’s not a given that they need redemption. They might have remained in full friendship with their creator”…

he said he was sure that, if needed, God’s mercy would be offered to aliens, as it was to humans.[2]

Aliens might have souls and could choose to be baptised if humans ever met them, a Vatican scientist said today…Guy Consolmagno, who is one of the pope’s astronomers…”Any entity – no matter how many tentacles it has – has a soul.” Would he baptise an alien? “Only if they asked.” [3]

As an aside: they will baptize babies without permission but they will not baptize aliens uless they ask (what will they do about baby alien?).

To make a long story short (for details see Roman Catholic Basic Historic Background – How the Pope Became Supreme) Roman Catholicism began from a background of various bishops with equal authority overseeing various cities. Then the Bishop of Rome claimed supreme authority. They it was claimed that there was no salvation without adherence to the Bishop of Rome aka the Pope. Later, and likewise, it was claimed that anyone contradicting Roman Catholic doctrine or dogma was anathema—eternally condemned. Then the Roman Catholic church decided that Muslims who did not convert to Catholicism or any form of Christianity are saved (see CCC# 841). One century Protestants were condemned to hell and the next they were “separated brethren.” And then, of course, the Vatican just went totally universalist (only condemning to hell ex-Catholics): the Pope was anointed by a Hindu. People kiss the Pope’s ring to show their allegiance to his authority, what does it mean when the Pope kissed the Qur’an? In short, Roman Catholicism is currently encouraging and celebrating each and every, all, false and YHVH condemned theologies and practices.

But how to, really truly logically and theologically, claim salvation by each and every non-, un- and anti-biblical wide path/road which humanity has (ill) conceived?

Why was it necessary for Jesus to incarnate, live, die and rise again for us? Because being sinless, He was eligible to take our sins upon Himself. 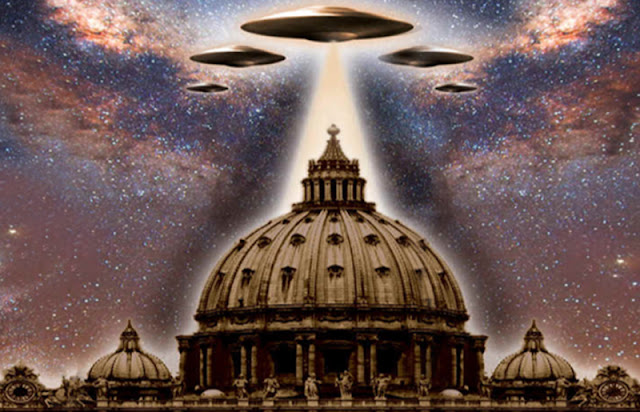 Vatican reps are now stating that aliens are (or, may be) sinless. Therefore, a scenario could unfold whereby aliens are presented as the literal saviors of humankind. They would be the universal saviors, in a manner of speaking, as while Jesus saved those by grace through faith in Him, the aliens could save all of humanity regardless of theology.

In fact, this concept has already been at work, to whatever degree, within Roman Catholicism ever since Mary (non Jesus’ historical mother but a Roman Catholic mythological figure) was proclaimed to have been both born sinless meaning free from original sin which is known as Immaculate Conception and also sinless through her whole life.

This pseudo-Mary has been taking attention away from Jesus, even whilst claiming to point to Him, for centuries and has recently been called (unofficially) the Goddess of the Americas.

Roman Catholic Church: Our Lady of Guadalupe – Officially or Unofficially the Goddess of the Americas?

These are some reasons why those who await the great and powerful rulers of the world to finally reveal and disclose the existence of aliens are placing their hopes in the wrong place. This is because, as we elucidated in a previous article: the ultimate revelation will be the ultimate deception.